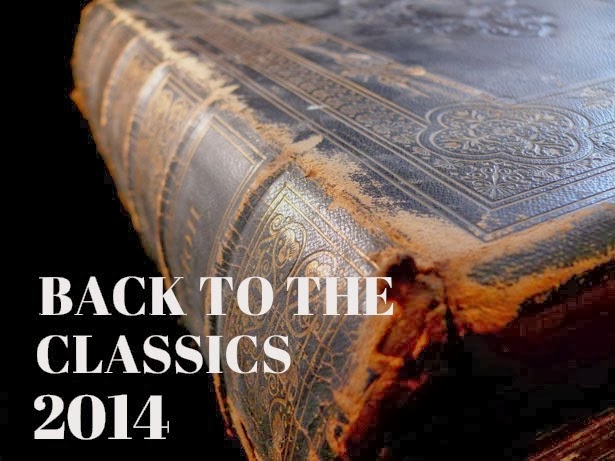 2014 is drawing to a close and it is time to start looking back over the books I read this year.  The bulk of my reading consisted of classics chosen specifically for the Back to the Classics 2014 challenge hosted by Karen at Books & Chocolate.  I completed all of the categories!  Here is what I read:

20th Century Classic - Joy in the Morning by P. G. Wodehouse
19th Century Classic - Tess of the d'Urbervilles by Thomas Hardy
Classic by a Woman Author - Mary Barton by Elizabeth Gaskell
Classic in Translation - Eugene Onegin by Alexander Pushkin
Classic About Way - Night by Elie Wiesel
Classic by an Author Who Is New to Me - The Phantom of the Opera by Gaston Leroux

American Classic - Fahrenheit 451 by Ray Bradbury
Classic Mystery, Suspense, or Thriller - And Then There Were None by Agatha Christie
Historical Fiction Classic - Rob Roy by Sir Walter Scott
Classic Adapted to a Movie or TV Series - The Enchanted April by Elizabeth von Arnim
Movie Review of Film Based on Book in Category #4 - Enchanted April

This was a fantastic challenge and it certainly helped knock a lot of classics off my TBR list!  I don't know if I will read a book in every category again, but I certainly plan on participating in 2015.  Thanks, Karen for hosting!

“There is always a pleasure in unravelling a mystery, in catching at the gossamer clue which will guide to certainty.”

As most people know, the Victorian era was a time of great change in the Western world.  It was a time of invention, of industry, of power, and of great wealth.  It was also a time of social upheaval, of intense poverty, and of class division.  And while our minds might immediately envision the narrow, dirty streets of Dickens' London, another author asked us to turn our eyes to the north and see the squalor, the heartbreak, and the division that was eating away at the heart of England's manufacturing district.

Mary Barton is the only living child of John Barton, a mill worker in Manchester.  Her mother died when Mary was young and her father blames her death on the sudden disappearance of his sister-in-law, Esther.  John is heavily involved in the trades union in Manchester and has become more and more depressed over time as the industry has hit a rough patch and paying jobs are scarce.  Mary takes a job at a dressmakers and to help support herself and her father.

Mary's long-time friend, Jem Wilson, has loved her for years but is turned down when he proposes.  Mary has her sights set higher and is enjoying the secret admiration of Harry Carson, the son of a prominent mill owner.  But when Harry is murdered and Jem is arrested for it, Mary realizes where her affections truly lie and she sets out to do everything in her power to save the man she loves.

The first novel by Elizabeth Gaskell that I read was North and South, which I absolutely loved.  I was pretty excited to read this novel, which was her first.  Though this one didn't affect me the way that one did, it is still a solid read.

It's neat to see a female Victorian author take on the issues of social justice and economic inequality as passionately as some of the male authors (like Dickens and Trollope).  Gaskell comes out swinging, showing us the abject squalor that was the reality for so many people of that time.  And while she doesn't blame the mill owners and wealthy for the economic situation that is causing it, she does fault them for refusing to see and help the needy people all around them.  John Barton goes to extremes in his retaliation, but one can imagine the desperation one might be driven to if you watch others live in lavish comfort when your own friends and loved ones are dying.  It was also interesting to see the geographical disconnect between London and Manchester.  Even today, it is easy for those who live in the seat of power to simply turn a blind eye to the needs of those who live further away.

While the social aspect of this story is as solid as that of North and South, the narrative is not.  It is harder to connect to these characters the way we do Margaret Hale and John Thornton.  Mary comes off as rather flighty and seems to have less spirit than Margaret.  And while Jem is a sweet guy, he lacks that quality of strength and passion that John Thornton embodies.  As a whole, the narrative seems less tight and comes off as rather heavy handed at times.

This is certainly a solid read and a must for anyone who loves Gaskell or Victorian lit.  If you are new to Gaskell's works, however, I would suggest you start with North and South.  You'll get the same social message with a better story and stronger characters.
Posted by bookwormans at 9:50 AM 1 comment:

The Phantom of the Opera 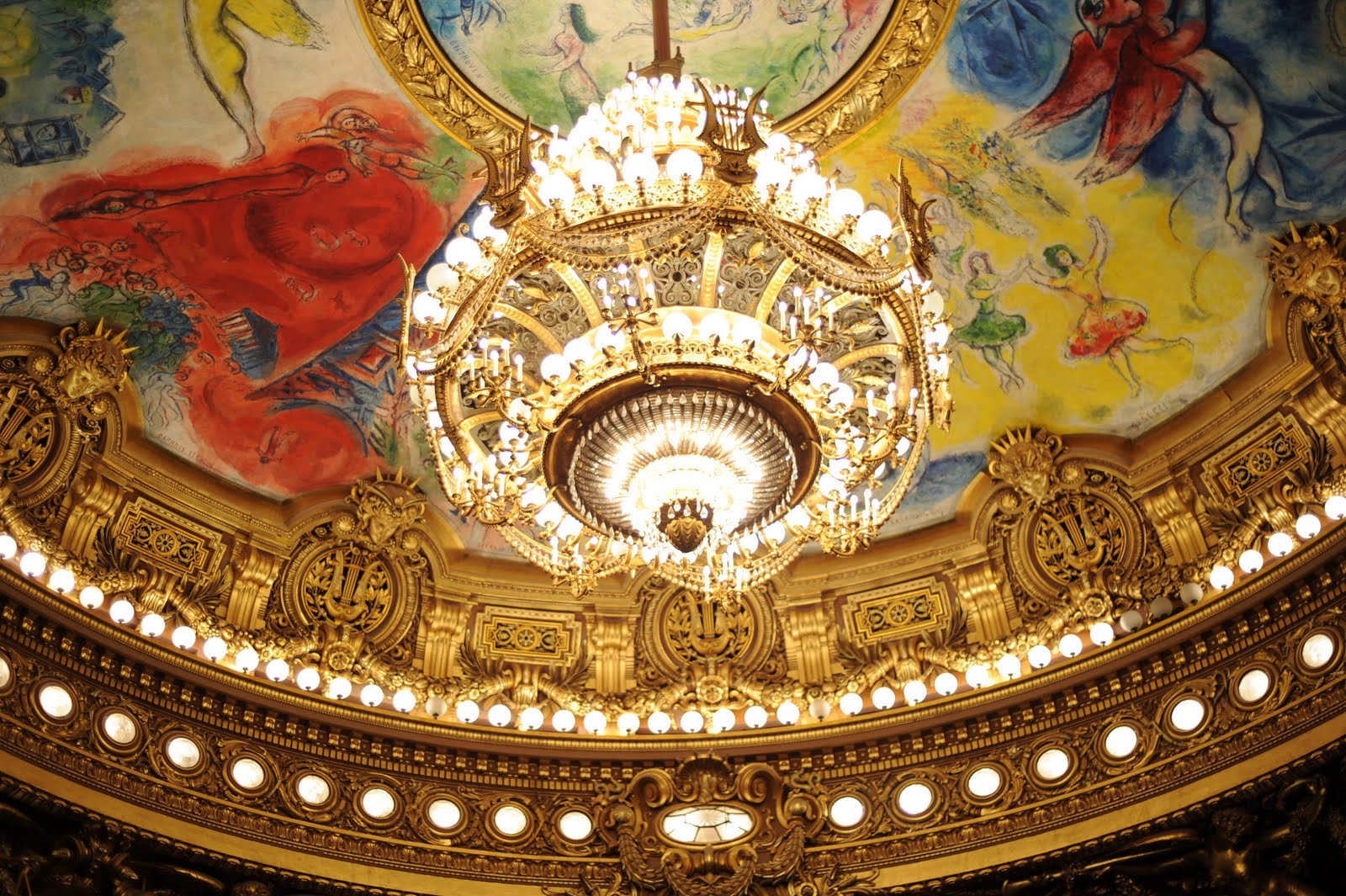 In 1910, French writer Gaston Leroux published a novel that drew from his time covering the Paris Opera as a reporter.  Based on actual historical events at the opera, his story would go on to be the basis for many adaptations.  The story was finally immortalized by the 1986 Andrew Lloyd Webber musical which is the longest running musical in Broadway history.

In the light and glitter of 19th century Paris, the Paris Opera has come under new management.  The managers are told of a phantom who haunts the opera and demands payments, a private box, and other things in exchange for keeping the opera safe from himself.  The new managers scoff at such a notion and begin to ignore the Phantom's wishes one by one.  It isn't long before mysterious things begin to happen in the vast opera house.

One of these is the rapid rise to stardom of a chorus girl named Christine Daae.  She is convinced that her dead father has sent the "Angel of Music" to help teach her as he once promised.  She becomes reacquainted with her childhood friend, Raoul, and tells him of her "angel" expressing both intense fear for it as well as passion.  Raoul is convinced that Christine is being held against her will in the power of an all too real man, and he sets out to discover the true identity of his rival.

Like most people, I first became aware of this story through the famous musical.  I like many aspects of the musical, though there is an element to Erik's obsession with Christine that is a little too creepy for me.  Still, I knew that many fans liked the book so I thought I would give it a try.

My overall opinion?  I wasn't too impressed.  This is a tricky story and I only see a couple of ways to really make it work.  The first is to read it as a sensation story.  Leroux's original readers would have been familiar with the historical context of the novel, and it obvious the Leroux was playing this up for sensation.  The whole story is played out like a mystery, as the identity and methods of the Phantom are slowly revealed.  You can certainly see the elements of Leroux's other writings which included detective fiction and "locked room" mysteries.  This is all well and good if you are new to the story.  Unfortunately, most of today's readers are not.  There is very little room for discovery and surprise since we already know the Phantom's identity, past, motivations, and his fate.  This takes a lot of the "sensation" out of the story.

The other way to make this work is to fill the story with something other than sensation...something like pity.  The reason the musical connects to so many people is that it does a good job of making you feel a strong amount of pity for the Phantom.  He is turned into this romantic anti-hero who needs only the love of a woman to make him a good man.  The book fails to do this.  Because Leroux is setting up an atmosphere of horror and suspense, he tends to play up the dark side of the Phantom.  Though there are small shots of sympathy here and there, we are never allowed to see things from the Phantom's point of view so it is difficult to see beyond his actions and his ugliness.

If you are a huge fan of the musical, then you will probably want to read this for more background and context.  For everyone else who may be a casual fan (or not one at all).  I'm not sure I can wholeheartedly recommend it.  It just didn't excite me very much.

I have seen two versions of this story.  One is the 2011 live production of the musical at the Royal Albert Hall starring Ramin Karimloo and Sierra Boggess.  I liked this production and it was nice to have the opportunity to see the actual musical.

The other is the 2004 film version starring Gerard Butler and Emmy Rossum.  I didn't hate it, but it didn't really become a favorite either.  The one decent aspect was Gerard Butler...didn't mind having him sing to me for a couple of hours!
Posted by bookwormans at 11:10 AM 1 comment: