It's that time of year again! Masterpiece Classic is getting ready to get into full swing for the 2012 season. There are a few new adaptations coming our way, so check your local listings and settle in for a good time this winter.

Downton Abbey Series 1 (December 18, 25, and January 1): Many PBS stations are currently broadcasting an encore presentation of this Edwardian period drama. It portrays life for both the family and the servants for the large Downton Abbey estate. Romance, treachery, death, and change all happen both upstairs and downstairs. The best series of the 2011 season and a must watch. If your PBS station is not broadcasting it, you can also find it on Netflix.

Sherlock Series 1 (January 15, 22, 29): This is an encore presentation of Masterpiece Mystery's smash hit from 2010. Starring Benedict Cumberbatch (War Horse) and Martin Freeman (The Hobbit), this is the classic Sherlock story set in modern day London. Smart, fast, and funny this is a must see. Be sure to catch it if you didn't when it first came out. The 2nd series will follow later this year.

The Old Curiosity Shop (February 26): This is a re-broadcast from the 2009 season. Stars Derek Jacobi and Toby Jones in this classic Dickens story of a girl and her grandfather on the run from a ruthless moneylender.

Great Expectations (April 1, 8): The first of two new adaptations of Dickens novels, this remake stars Gillian Anderson (Bleak House) and David Suchet (Hercule Poirot). Young Pip is an orphan who comes into a large amount of money due to a mysterious benefactor.

The Mystery of Edwin Drood (April 15): Dickens' last (and unfinished) work gets its first television adaptation. It is a psychological thriller about a choirmaster's obsession with 17 year old Rosa Bud. Stars Alun Armstrong, Julia McKenzie, and Matthew Rhys.

Birdsong (April 22 & 29): Based on the Sebastian Faulk novel, this is the story of two lovers torn apart by World War I. Stephen Wrayford's pre-war affair with Isabelle Azaire continues to effect him as he fights in the trenches. Stars Eddie Redmayne (Tess of the d'Urbervilles, My Week with Marilyn) and Clemence Posey.
Posted by bookwormans at 7:51 AM No comments:

Our greatest heart-treasure is a knowledge that there is in creation an individual to whom our existence is necessary - some one who is part of our life as we are part of theirs, some one in whose life we feel assured our death would leave a gap for a day or two.
Stella Maria Sarah Miles Franklin is not a name most Americans would be familiar with, but it is instantly recognizable to our friends down under. Under the name of Miles Franklin, she became one of the foremost writers of Australian literature, and even bequeathed the Miles Franklin Award which is annually awarded to the best Australian novel or play. Her first (and best known) novel, My Brilliant Career, was written while she was in her teens, and published in 1901 when she was in her early twenties. It became a smash hit, but due to its many recognizable similarities to her own life, Franklin stopped its publication until after her death in 1954.

Sybylla Melvyn is a headstrong, independent young woman growing up in the Australian bush in the 1890s. After much bad luck in business, her family falls on hard times and Sybylla struggles to adapt to the monotonous "drudgery" of their new life. Relief comes in the form an invitation to stay with her somewhat wealthier grandmother and aunt. There, Sybylla finds much of the freedom and culture that she has always craved, though she is often corrected by her relatives for her "unladylike" behavior. She also meets Harry Beecham, a young landowner who finds her interesting and different from most of the other young women that he has met.

It isn't long before they become the best of friends, and it soon becomes obvious that Harry is in love with her. Sybylla feels only friendship for him, swearing that she is not the type of woman a man can really love, and that she never intends to marry. News then comes that her family is in difficult straits and that she must work as a governess for a neighbor to pay off a debt. Sybylla is whisked away to live in absolute squalor with people who can barely read or write. Every day becomes harder and harder for her to live. Will she be stuck here forever, or will a renewal of Harry's proposal be her best chance for escape?

This was my first taste of Australian literature, and it was overall a good read. There were some terms I had to get used to, like "jackaroo", and also the idea that December is a very hot month down there. But all in all it is kind of like English literature with a big twist.

Overall, I enjoyed the story. Sybylla is an endearing (if, at times, infuriating) character. You can't help but root for her as she struggles to balance her own desires with what the society of the time demanded from young women. And yet, the fact that this story is not just about a teenager, but BY a teenager, makes it seem a little immature. Sybylla's obsessions, especially with her looks, makes the novel's worldview rather immature (though not the writing itself). My other major problem is that I'm a romantic, and I really wanted Sybylla to marry Harry. Heck, I wanted to marry Harry. He's strong, fun loving, intelligent, responsible, caring, patient...what more could you ask for in a guy? Though in the end, I think that Sybylla may have made the right choice for herself, it didn't jive with my own feelings.

But more than a story of a young feminist trying to conquer her own destiny, My Brilliant Career is a love song to the people and literature of Australia. Through the course of the novel, Sybylla develops a sort of love/hate relationship with the drovers, pioneers, and squatters of the outback, at once despising the monotony of their way of life and admiring them for the courage with which they face it. Even when she is living in the comfort of her grandmother's estate, she is never more happy than when she is picking apples in an old dress or helping drovers move their sheep across the land. There are also many times that Franklin expresses the need for true Australian literature, similar to that of Banjo Paterson, Henry Lawson, and C. J. Dennis. Works that would tell Australia's story through the eyes of her children. One has to wonder if Franklin, as she wrote this, ever knew that her own name would one day be as famous as those.

Though there is an unevenness about this novel, it is definitely worth a read. I wasn't overly pleased with the ending personally, but it was an enjoyable story that I had a hard time putting down. If you are looking for a classic taste of the land down under, this is a good place to start.

There is currently one film adaptation of this novel, and that is the 1979 version directed by Gillian Armstrong and starring Judy Davis and Sam Neill. This was a great adaptation that really helped smooth out the story's rougher edges. A wonderful companion to the book.
Posted by bookwormans at 4:41 PM No comments:

Once again, the Book Blogger's Holiday Swap was a big success for me. I had so much fun giving (and receiving) bookish things and really do encourage other book bloggers to give it a try.

My "Secret Santee" this year was Michelle over at "The True Book Addict". She loves historical fiction, Christmas books, and cats, so I tried to hit all of these notes in the package. Here's what she received:

-Queen Defiant by Anne O'Brien (from her wishlist)
-Amaryllis: A Holiday Anthology by Pomegranate Writers' Group (a group of local writers in my hometown) with a matching bookmark.
-Two cat note cards
-Spanish Castile soap from Twisted Oak Farm

I had a great time putting Michele's package together, and I look forward of perusing more of her lovely blog.

Yesterday, the gift package from my own Secret Santa arrived. Erica works for Harper Perennial (part of Harper Collins Publishers) and she helps manage their blog "The Olive Reader". Here are the goodies that she sent me:

Jane Eyre by Charlotte Bronte
Anyone who has spent any amount of time on my blog knows that Jane Eyre is my all-time favorite book. It's so great to have a new edition, especially since the print is bigger than my other edition. Plus the cover is simply stunning!

To Kill a Mockingbird by Harper Lee

Though I didn't particularly care for this book when I first read it in middle school, it is now very dear to this Southern girl's heart. Having this lovely 50th Anniversary edition means that I can now give my mom's copy back to her.

This is a book devoted entirely to the film Breakfast at Tiffany's which I saw for the first time this year. Wasson explores how this movie came into being, and how it (and Audrey Hepburn) help set the tone not only for future films, but for the 60s themselves. Really looking forward to this one. 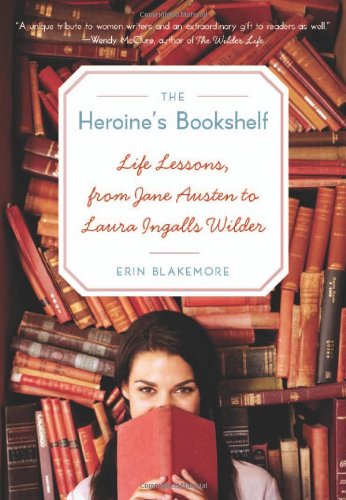 The Heroine's Bookshelf by Erin Blakemore

This book explores the great heroines of literary history and the amazing women who created them. Blakemore also touches on how we as modern women can learn from these characters and writers of the past. Should be a very fun read.

Thanks again, Erica, for the amazing books. I can't wait to get started on them. It's time to build more bookshelves! If you are a book blogger and you have never participated in the Holiday Swap, I strongly encourage you to do so next year. It is a great opportunity to get connected with other readers around the world. Who knows...you just might be my secret santee next year.
Posted by bookwormans at 7:39 AM No comments: