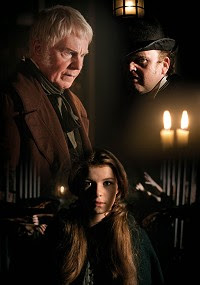 When I first read about Masterpiece's showing of a new adaptation of The Old Curiosity Shop, I had to wonder, "Can you effectively adapt a 600 some page Dickens novel to a 90-minute film?" The answer in this case is a resounding NO!
It's really amazing how you can tell the difference between an ITV production and a BBC production. With the exception of one, the ITV films that I have seen have always come out somewhat shallow, merely scratching the surface on some of the best novels in the English language. The Old Curiosity Shop is no different.
First off, The Old Curiosity Shop is known as Dickens' most sentimental work. Many readers were left distraught over Little Nell's tragic ending. This production strips the story of almost all of it's sentimentality, which can be a good thing if it is replaced with something else such as suspense (Bleak House) or romance (Little Dorrit) . But there is nothing to replace it here, not even length. We can't really feel sorry for any of the characters, because nothing in the film's atmosphere draws us to them.
Secondly, the script itself lacked any depth. The plot was streamlined to fit it's 90-minute time frame, and consequently many characters and events were cut. I would question why ITV would got to the trouble of attaining such brilliant actors as Derek Jacobi, Zoe Wanamaker, and Gina McKee if they are going to have them play such shallow characters. The grandfather (Jacobi) is simply a man with a gambling problem. We are not really allowed to see his inner pain and conflict (compare this to Tom Courtenay's portrayal of William Dorrit). Sophie Vavasseur as Nell was another problem. As with the rest of the film, she is stripped of her sentimentality and it just doesn't work here like it did for Esther Summerson or Amy Dorrit. We need something to make us care whether Nell lives or dies, and Vavasseur/the script just couldn't deliver. Add to this the seemingly happy ending for the grandfather and you are left with a feeling completely different than those that Dickens intended.
I am willing to give the film good marks on a few points. The sets, costumes, etc. were good and matched up with any other Dickens adaptation. And Toby Jones is sufficiently creepy and disgusting as Quilp. But all in all, this adaptation left me with a feeling of "Whatever." I just didn't care. Basically, it's an adaptation of the CliffsNotes version rather than of the novel itself.
Posted by bookwormans at 6:15 AM

I saw the movie last night and agree with your assessment. I have not read The Old Curiosity Shoppe, but I have read many of Dicken's other works. It was obvious that insufficient time was given to develop the characters in the story. I was left with no idea why the grandfather and son had been separated and yes, Nell's death did not have any of the emotional impact it should have had. Nice review!