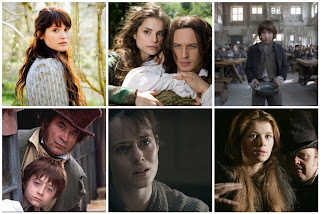 Once again, we have come to the end of another season of Masterpiece Classic. I have had a kind of love/hate relationship with this season. Only 3 of the films were really interesting to me, I'm only considering 1 of them for purchase, and none of them were real showstoppers. For the past few years we have been able to count on at least one film to be so good that it would make the entire season satisfying (Bleak House, Jane Eyre, Cranford), but this year didn't seem to have a "defining" film. I'm not saying that this season was a total waste, it just wasn't as good as some previous ones. Anyway, here is my ranking of this season's films from least favorite to most favorite.

#6-The Old Curiosity Shop: Not even great actors like Derek Jacobi and Gina McKee could save this. The plot was super-streamlined, the emotional pulls were destroyed, and I couldn't have cared less about Nell. Hardly worth staying up for.
#5-Wuthering Heights: I realize that this is not an easy book to translate to film, but this one just really lacked substance. Every character seemed to be a mere shadow of their novel counterpart and there was more, um...skin, than was really necessary. Decent marks for Tom Hardy, Burn Gorman and the Yorkshire moors setting. Oh, and I loved the uber-Gothic exhumation towards the beginning. Really creepy!
#4-Oliver Twist: This was a fairly good adaptation, just nothing special. In my opinion, it was Tom Hardy as Bill Sykes who really held up this film, especially in the "haunting" scenes. I also enjoyed Adam Arnold as The Artful Dodger and the darker atmosphere of the film. Overall, a decent adaptation.
#3-David Copperfield: A classic example of what a good BBC drama looks like. Engaging story, stellar cast, lovely production qualities...simply a wonderful period drama. A must see!
#2-Little Dorrit: Andrew Davies serves up another great adaptation. What really makes this film wonderful is the cast. Tom Courtenay, Matthew McFadyen, Claire Foy, Russell Tovey...they were all wonderful. It also held true to the themes that Dickens was trying to communicate. The only real problems were the rather confusing plot(s) and the fact that it tended to drag in some parts.
#1-Tess of the d'Urbervilles: You could switch this with Little Dorrit and I probably wouldn't argue (too hard). But Tess is in the #1 spot for one reason-Tess (Gemma Arterton). More than any other hero/heroine from this season, she is the one whom I connected with the most. Her story was heartbreaking, inspiring, and bittersweet and Gemma was simply stunning in the role.
All in all, I did enjoy most of this darker season of Masterpiece Classic. I think that our host for this season, Laura Linney, deserves some special recognition. She's no Alistair Cooke, but I did enjoy her more than Gillian Anderson. The best thing about this season, however, was getting to watch the show with my younger sisters and seeing them develop a love for these classic stories. They've even begun insulting me Dickens style. For instance, my 15 year old sister thought that I was being too bossy one day, and she glared at me and yelled "You're such a Mrs. General!". Oh well, at least she hasn't called me Murdstone yet.
Posted by bookwormans at 6:32 AM