Masterpiece Theatre: Tess of the d'Urbervilles 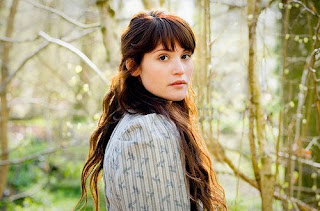 This year's Masterpiece Classic sure started things off with a bang, and set the tone for what looks to be a darker and more reflective season. There is really only one way to describe this adaptation of Thomas Hardy's classic novel: gut wrenching. Now, I haven't ever read Tess of the d'Urbervilles, but I knew enough about the story to know that I was setting myself up for a rather tormenting evening. But just as you can't stop watching a train-wreck, so my eyes were glued to the set, no matter how awful things got for the heroine. Though all of the actors were good, it is the three main characters that rivet us to the story.
-Gemma Arterton was simply stunning as Tess. No matter what scene she was in, it was impossible to take your eyes off of her. I also liked that she portrayed Tess with an inner strength and dignity that kept her from being too pathetic. She really allowed Tess's true purity to shine through.
-Hans Matherson played Alec d'Urberville with just the right amount of attractiveness and slime. He also allows us to see the rather tormented side of the character. Plus, his scenes with Gemma Arterton were just plain wonderful. They had great chemistry.
-As Angel Clare, Eddie Redmayne was perhaps the weakest of the three principle actors. Nevertheless, he was still able to gain my sympathy for his character. In the scenes following the revelation of Tess' past, he is able to reflect the many emotions that Angel should have been feeling; anger, hurt, resentment and love are written all over his face.
The production quality was nothing less than you would expect from the BBC. Stunning landscapes, great costumes, and wonderful music. From Stonehenge to the last dance between Angel and Tess, every scene was poignant and bittersweet. I thought that the script also did a great job of bringing out the characters. My favorite line was after Tess killed Alec and Angel asked if she had any sense of right and wrong. Tess replies "Of course I do, that's why I killed him!". I also loved the haunting refrain of "The Snow it Melts the Soonest".
Overall, it was a great (if heartbreaking) way to start off this new season. I'm just not sure if Americans really need these rather depressing stories right now! Up next is a new adaptation of Emily Bronte's Wuthering Heights.
If you missed Tess of the d'Urbervilles, you can watch it here for a limited time.
Trivia: I often see actors that I recognize from other productions, but this is the first time I recognized a set. Some of you might have recognized the train station in Tess as being the one from the final scene of BBC's North and South. They did their best to change it by darkening it up, but the green rails on the side of the camera shot were dead giveaways.
Posted by bookwormans at 11:36 AM