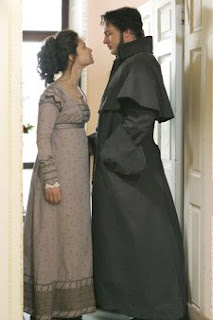 I suppose that I should begin this review with a disclaimer. It has been a LONG time since I read Wuthering Heights, and I didn't particularly care for it when I did. Also, I've never seen any other version of this story, so I was going into this adaptation with only a vague sense of what I was in for. My overall verdict was...it was okay. Admittedly, this has got to be one of the hardest novels to adapt for the screen.
The adaptation begins, not with Mr. Lockwood hearing the story of his new landlord (in fact, Mr. Lockwood isn't in this adaptation at all), but rather with Heathcliff forcing young Catherine Linton to marry his son Linton Heathcliff. This made the beginning rather confusing, especially for my sisters who hadn't read the book. But by the end of the first 1/2 hour, it hit its stride and the story became more familiar.
My main problem with this adaptation as a whole was its lack of character development. Each of the characters seemed to be mere shadows of their novel counterparts; the shape and form was there, but no substance. We find a Heathcliff and Cathy who are too nice, an Edgar and Isabella who are too strong and self-assured, and a Catherine, Linton and Hareton who never really come into their own. Also, the most famous scene from the novel ("I am Heathcliff!") is so calm and nonchalant that I almost missed it.
But there were some good points to this adaptation as well. The overwhelmingly Gothic tone gave it great atmosphere (Heathcliff exhuming Cathy's long-dead corpse was deliciously dark and creepy), and the fact that they downplayed the "romantic" aspects of Heathcliff and Cathy's love was a nice touch as well. I also thought that Tom Hardy did a good job as Heathcliff and Burn Gorman as Hindley. They seemed to be the only ones who could really overcome their character's lack of development. The real star of the show, however, were the wild and bewitching Yorkshire moors. Thank you to the production team for choosing to film this adaptation in its original setting.
Up next: A repeat of last year's Sense and Sensibility starring Hattie Morahan and Charity Wakefield. Read my review here.
If you missed Wuthering Heights, you can watch it here for a limited time.
Trivia: Bronte Fans might have noticed the continual appearance of Sir Walter Scott's classic Ivanhoe in the film. The writings of the Bronte sisters were heavily influenced by the writings of Scott.
Posted by bookwormans at 6:33 AM