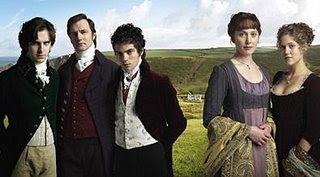 Sense and Sensibility has always held a special place in my heart. It was not only the first Austen novel that I ever read, but it (the '95 version) was also the first Austen adaptation that I ever saw. I was, therefore, rather skeptical when I sat down to watch the final installment in Masterpiece Theatre's rather lukewarm "The Complete Jane Austen" series. I really didn't think that they would be able to come anywhere close to the wonderful Emma Thompson adaption. I stand corrected. Bravo to Masterpiece Theatre for ending this series on a high note. While it is by no means perfect, it certainly makes a wonderful companion to the '95 version.
MY LIKES:

The 2 adaptations of this great story complement each other beautifully. I just might have to add the 2008 version to my collection. By the way, has anyone ever noticed that only Jane Austen fans have multiple versions of the exact same story?

Note: Since "The Complete Jane Austen" has now officially come to an end, I thought that I would rank the adaptations from my least favorite to my favorite.

#7. Persuasion- Though I love the story, this adaptation was just too rushed. Not to mention that ending.

#6 Mansfield Park- Loved Blake Ritson, but this was just a bare bones adaptation. It was okay, but it could have been done much better.

#4 Northanger Abbey- Very good, even if Andrew Davies did spice it up a bit too much.

#2 Sense and Sensibility- I loved it. A must see version of a classic story.

#1 Pride and Prejudice- If you don't see any other Austen adaption, see this one!