The Show Goes On

"The Complete Jane Austen" series may have come to a close, but the Masterpiece Classic season is not over yet. If you missed any of the Austen series (or if you simply want to seem them again), you can purchase them at Amazon.com and other online video stores, or you can rent them through Netflix.com. Here's a preview of what to expect from the rest of this season.

A Room with a View

Based on the novel by E. M. Forester and adapted by Andrew Davies, this adaptation stars Elaine Cassidy as Lucy Honeychurch and father and son actors Timothy and Rafe Spall as the Emersons. Also stars Timothy West, Mark Williams and Sophie Thompson (sister of Emma). 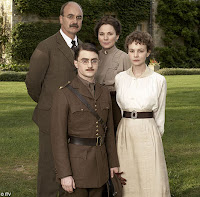 This film tells the story of famed British author Rudyard Kipling and his son Jack. It's 1915 and World War I is raging in Europe. Kipling is determined that Jack, just 17 years old, will serve at the front, despite his crippling nearsightedness, and using his fame and influence, he soon obtains a commission for the boy. But when Jack goes missing in action, Kipling and his family begin a desperate search that will span many years and miles. Stars David Haig as Kipling, Daniel Radcliffe as Jack, Kim Cattrall as Caroline Kipling and Carey Mulligan as Elise Kipling.

Adapted from four of novelist Elizabeth Gaskell's works (Cranford, My Lady Ludlow, Mr. Harrison's Confessions and The Last Generation in England), Cranford relates the story of a small town in Cheshire, a town that is dominated by women and settled in a traditional way of life. But the railroad is about to come through, bringing with it many modern ways and ideas, much to the alarm of some of its inhabitants. Stars many of Britain's finest actors and actresses including Judi Dench, Imelda Staunton, Eileen Atkins and Greg Wise.