Masterpiece Theatre: A Room with a View 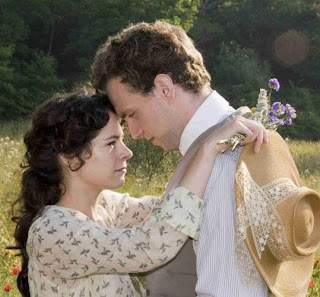 Remember how back in January, I said that the new Persuasion adaptation was the worst Masterpiece Theatre program that I had ever seen? No more, it has been dethroned by A Room with a View. Now I will grant you that the book itself has some fundamental flaws, especially in the Christian sense, but Andrew Davies manages not only to mix in themes that are not really there, but even to add plot twists that change the overall feel of the story.
Likes:

In the end, I was really disappointed with this adaptation. Though it certainly had a lot of potential (good actors, nice scenery, decent story) it ended up leaving me rather bored and wishing that I had gone to bed. Put simply, I was not impressed.

Note: There is another version of this story that was done back in the mid-'80s. I have not personally seen it, but it is considered very good by many, and was nominated for many awards.

I so agree! I came across your blog while trying to understand the ending--I certainly did not remember the WWI aspect from the original. Not to mention that, as you said, many of the more objectionable (but subtle) themes were pushed to the forefront for the "modern" audience. I guess I'll be renting the 1980s version in an effort to remove this one from my memory!

This was a very good review.

But I would like to point out that neither Andrew Davies or EM Forster's post script (was it called "View With Out a Room"?) were t very positive either. EMF's version mentions that both are conscience objectors to WW1. It is not Lucy, but George who revisits the pensione years later. And most horrifying of all: George is NOT faithful to Lucy but rather has an extra marital affair. I chose to ignore the post script completely and just chalk it up to Forster becoming bitter in his middle years.

After reading "A Room With a View" in my senior year of English (the British year, of course), the story has long been one of my favorites. The movie made in the 1980's is good too although it does have a scene or two where one might need to turn one's head. The MT production's ending was a great switch from the book and the earlier movie although I have never heard of this footnote until now and am interested to learn that this is not just something that Davies dreamed up all on his own.

I found this site using [url=http://google.com]google.com[/url] And i want to thank you for your work. You have done really very good site. Great work, great site! Thank you!