Off With the Bonnets! 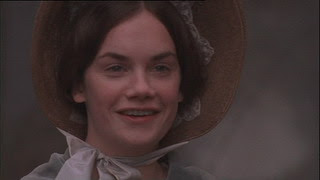 According to British newspapers The Guardian UK and The Telegraph, the BBC (which supplies Masterpiece Theatre with many of its shows) is moving away from the traditional "bonnet" dramas in favor of grittier and more modern tales. Some of the newer dramas include adaptations of The Diary of Anne Frank and The 39 Steps.

"There is to be an evolution in the presentation of period dramas, moving away from classic 19th century so-called 'bonnet' dramas to looking at other periods of history. This will allow us to look at other times and places in British and world history. The aim is to give drama audiences something new and different to enjoy."
Though I love many of the BBC's traditional dramas, I think this is a good step for them to take. I already tend to get stuck in 19th century Britain with my reading anyway, so maybe this could help jump start me out of Victorian lit, much as I love it. And with great works like My Boy Jack and God on Trial already in their library , the BBC has proven that they are quite capable of handling the grittier stories.
Posted by bookwormans at 11:03 AM