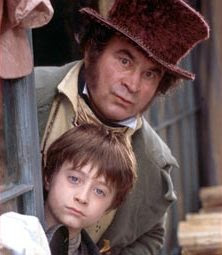 Of his seventh novel, Charles Dickens wrote "… like many fond parents, I have in my heart of hearts a favourite child. And his name is David Copperfield." Masterpiece Classic continues its "The Incomplete Charles Dickens" series with an encore presentation of the BBC's 1999 adaptation of what is considered by many to be Dickens' greatest work.
In my opinion, David Copperfield serves as a classic example of what a good BBC period drama looks like. All of the elements are in perfect order from the costumes to the sets to the music. But there are two things that stand out in this adaptation and really make it a must watch.
The first is the acting, which is nothing less than superb. Both of the actors who played David (Daniel Radcliffe and Ciaran McMenamin) gave well-rounded performances and really helped the audience to sympathise with their character. I also really enjoyed Maggie Smith as Betsey Trotwood and Pauline Quirke as Peggotty. But really, there was no weak link among the actors. All of the them from Ian McKellen to Alun Armstrong to Imelda Staunton gave the solid performances that we have come to expect from them.
The other thing that made this film stand out among the others from this season was its ability to engage my emotions. It's been awhile since I became so engrossed in a Masterpiece production. I found myself cheering for Betsey Trotwood when she almost chokes Uriah Heep, crying over the death of sweet Ham Peggotty, and thinking of cruel and tortuous ways to kill Edward and Jane Murdstone. Frankly, I just really enjoyed this adaptation.
I absolutely recommend this film to anyone, especially period drama fans. From its stellar cast to its engaging story, David Copperfield reminds us why we watch Masterpiece Theatre. Though perhaps not as breathtaking as Bleak House or Cranford, it is still a solid production and a great way to spend an evening.
Up next: "The Incomplete Charles Dickens" continues with a new adaptation of Little Dorrit starring Matthew MacFadyen, Tom Courtenay, Claire Foy and Andy Serkis.
Posted by bookwormans at 7:27 AM