Okay, I try to be forgiving when it comes to adaptations of books. You can't simply slap scenes from the page onto the screens. Cinematic art requires that stories be interpreted and changed to fit the new medium. However, I do feel that the essence of the story and the author's feelings on certain subjects should remain intact. Here is the film that I feel did the worst job in translating its story from book to screen. 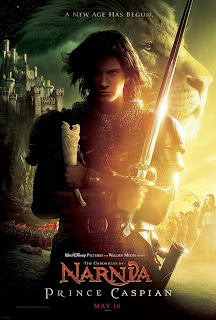 The Chronicles of Narnia: Prince Caspian

By the time I got around to seeing Prince Caspian, my expectations were already kind of low. I had lots of misgivings about the first film, The Lion, the Witch, and the Wardrobe, and the reviews that I was reading on the Internet were not all that great. I was willing to give it a shot, however, and I REALLY tried to go into it with an open mind. By the end, I wanted to throw something at the TV. C. S. Lewis is one of my favorite authors, and though I'll grant that Prince Caspian is probably the weakest book in The Chronicles, it still deserved a better interpretation than this. Here are some of the problems:

I'm not saying that you can't enjoy this film. There are many people who can, like my younger sister. I just know that, as someone who loves Lewis' original creations, I find adaptations like these to be detrimental to the stories. It is especially depressing when I hear a young person say how much they love the stories, and yet have never actually picked up the books. They don't know what they are missing.

How about you? Is there a film adaptation of one of your favorites that you wish could be destroyed and forgotten?

Posted by bookwormans at 7:24 AM

Good call. I too love the original Narnia series and I had serious misgivings about the first movie. Mainly that it was unendingly boring.

I wasn't even going to watch Prince Caspian and you totally validated my feelings.

The third "Anne of Green Gables" movie veered so far away from the books that I was highly disappointed in it. Where did they get the plotline? Their own imaginations?

I so agree with Prince Caspian ! I laughed and groaned throughout the whole movie. To me, Caspian and Peter were the worst characterized. Great job on describing Peter (How do you do that?).

Another thing I noticed in the movie was the gathering of the old Narnians (it resembled the gathering of elders in middle earth), as did Caspian's speech to Frodo's). So, they did do one good thing : They pointed out the three missing lords, which will help in the next movie(?).Maybe?

I didn't like Prince Caspian that much. The whole thing about Susan and Caspian was way out of line in my opinion. If it was closer to the book, it might have been slighly enjoyable. It was a rip-off.
Kathleen