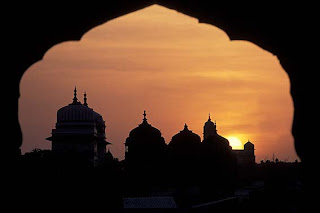 Though British author Rudyard Kipling is best remembered for his work of short stories, The Jungle Book, it is his 1901 novel Kim that is considered by most to be his masterpiece. It is a tale of adventure and intrigue and offers us a fascinating glimpse into the varied and vibrant cultures of India during the British Raj. This is Kipling at his best. This is the India of our imagination.
The Plot:
Young Kim (Kimball) O'Hara is the orphaned son of an Irish soldier who earns his living by begging and running small errands in the streets of Lahore. His only link to his heritage is a small pack of papers and a "prophecy" from his father that "a red bull on a green field" would be of help to him. One day, he meets a Tibetan Lama who is on a quest to free himself from the Wheel of Things by finding the legendary "River of the Arrow". Kim decides to become his chela (disciple) and accompany him on his journey.
This journey will take them all over India from the pulsing city of Bombay to the remotest parts of the Himalayas. One evening, Kim encounters the "red bull on a green field" from his prophecy. He soon finds himself at one of the most prestigious English schools in India, being trained as a spy for the British government. Kim is thrilled with this chance at adventure, but he finds it hard to reconcile his native habits with his new found English ones. The time then comes when he will need all of his skills, both English and native, to accomplish his role in The Great Game.
My Review (Caution-Spoilers):
I have long had a fascination with India, especially the period of the British Raj, so Kim really appealed to me in that way. Kipling's writing style has a lovely poetic quality that brings out the beauty of this region. The heat, the noise, the colors, the spices; it all seems to float right off the page.
At its heart, Kim is a celebration of the many cultures and religions that call India home. From the Islamic horse trader Mahbub Ali to the Buddhist Teshoo Lama to the various Hindu citizens, we encounter so many different groups that it can be very confusing at times. I found it especially hard to keep track of which religion believed what. Kim, however, has no problem relating to the different cultures. His life as a beggar has taught him what to say to each group to gain their favor. Mahbub Ali even calls him "friend of all the world". This ability also helps Kim in his role as a spy in The Great Game.
Which brings us to the other part of this story; The Great Game itself. The Great Game refers to the rivalry and conflict between England and Russia for supremacy in Central Asia. The period is generally regarded as extending from the Russo-Persian Treaty of 1813 to the Anglo-Russian Convention of 1907. But though this rivalry existed for almost 100 years, it was not introduced into the mainstream public consciousness until Kim. Because of the strong feeling of imperialism found in Britain at the time, British readers found it thrilling to read of a young boy who was using all of his wits to help protect the "jewel in the crown" of the Empire. Today's readers are less likely to find it quite as thrilling, seeing as how most of us lack that strong patriotic fervor for the British Empire. Nevertheless, Kipling's writing style still gives us that feeling at times, and the espionage aspects of the novel will certainly keep you on your toes. One piece of espionage that readers should pay special attention to is the game Kim plays at Lurgan Sahib's jewelry shop. Forms of this game are still played today, especially in the Boy-Scouts and some branches of the military. It is often referred to as "Kim's Game".
Overall, Kim is the perfect novel to simply escape into. Kipling does a beautiful job at immersing us into a far-off and exotic land full of interesting people, vibrant cultures, and thrilling exploits. I would especially recommend it for younger (early teens) readers who are just beginning to wade into the classics. It is a very pleasant way to spend an afternoon.
The Movie:
There have been 2 main versions of this story adapted for the screen. The first is the 1950 film starring Dean Stockwell, Errol Flynn, and Paul Lukas. The other is the 1984 TV version starring Ravi Sheath, Peter O'Toole, and John Rhys Davies. I haven't seen either version, but their Amazon.com ratings give both of them pretty fair marks. If you have seen either version, please feel free to share your impressions of them.
Posted by bookwormans at 7:55 AM