The Posthumous Papers of the Pickwick Club 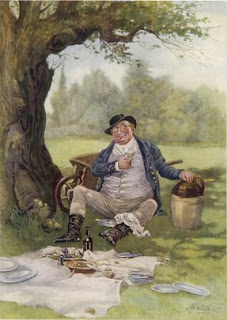 In 1836, publishers Chapman & Hall approached many authors about writing accompanying text for a series of engravings by renowned artist Robert Seymour, to be published monthly. They were turned down by several writers before asking a 24-year old upstart writer named Charles Dickens. Dickens accepted, on the condition that the engravings be made for the story, not the other way around. Chapman & Hall agreed and in March of 1836, The Posthumous Papers of the Pickwick Club appeared, setting its young creator on the road to immortality.
The Plot:
The novel itself is really a loose collection of the adventures of four friends: Samuel Pickwick, retired businessman and founder of the Pickwick Club; Nathaniel Winkle, avid sportsman (or, so he thinks); Augustus Snodgrass, poet (who has never actually written any poetry); and Tracy Tupman, a middle-aged bachelor with a weakness for ladies.
Together, the four men set out on a tour of England, looking for adventures and things of interest. Boy, do they find them. The men are caught in the middle of many situations, most of them absurd, all of them hilarious. As the story rolls along, the Club members meet with many varied and interesting characters like Alfred Jingle, Bob Sawyer, and Sam Weller, all of whom play a part in bringing the long and winding tale to its happy close.
My Review (Caution-Spoilers):
The Pickwick Papers was the next book in my attempt to read all of the works of Charles Dickens. I think that the importance of this book lies primarily in its popularity at the time it was written, its humor, and its foreshadowing of Dickens' later works.
Its popularity (not just in Britain, but all over the world) at the time of its publication is nothing short of phenomenal. At it's height, it sold 40,000 copies a month. And it continues to be popular today, along with his later works such as A Tale of Two Cities, Great Expectations, and David Copperfield. Without the success of The Pickwick Papers, we may have never had the later masterful works that defined Charles Dickens as THE premier Victorian novelist.
If you had to define this novel in one word it would be "hilarious". Dickens' wit and irony are here in full force. I had to be careful when I was reading this at work, because I would find myself laughing out loud and my co-workers wondered what on earth was so funny. Of course, there are some jokes that aren't quite as funny to us as they were to Dickens' original audience. Time and culture changes have caused some of them to fade. But there is plenty to keep the reader in stitches for most of its 56 chapters. Don't believe me? Check out this little poem ("Ode to an Expiring Frog") found in Chapter 15:
Can I view thee panting, lying
On thy stomach, without sighing;
Can I unmoved see they dying
On a log,
Expiring frog!
Say, have fiends in shape of boys,
With wild hallo, and brutal noise,
Hunted thee from marshy joys,
With a dog,
Expiring frog!
To me, the most fascinating things about this novel are the many foreshadowings of Dickens' later works. Though perhaps not as polished as the masterpieces, Dickens' style is familiar and well-done. Anyone who has read even one other work by Dickens should be able to pick up The Pickwick Papers without knowing the author, and within a few chapters know that this is a Dickens novel. The characters, though unique, remind us of the many eccentric characters to come. Other major Dickens themes such as the unjustness of the court system (seen again in Bleak House) and the inhumane debtors' prisons (seen in Little Dorrit) make appearances here as well, though in a more comedic fashion than in later works. But one of the most striking similarities is found in "The Story of the Goblins Who Stole a Sexton", which shares many elements with Dickens' most famous work: A Christmas Carol.
None of this is to say that The Pickwick Papers is Dickens' best work. It tends to drag in the beginning, not really hitting its stride until the appearance of Samuel Weller in Chapter 10. In fact, I would say that Dickens wouldn't have had much success in this work without this lovable, hilarious cockney. And the 56 Chapters (848 pages in one edition) can seem rather daunting at times. Nevertheless, I feel that this is a must read for anyone who likes Dickens or great Victorian literature. And it deserves our love and admiration, if for no other reason than it introduced the world to the hero of great literature for the common man. I know Mr. Pickwick would be very proud of this.
The Movie:
There are two movie versions of this story. The first was made in 1952 and starred James Hayter, James Donald, Lionel Murton and Alexander Gauge as the four Pickwick Club members.
The second version was made by the BBC in 1985 and stars Nigel Stock, Clive Swift, Alan Parnaby and Jeremy Nicholas.
I haven't seen either version, but many of the reviews I have read say that both versions are adequate and enjoyable.
Posted by bookwormans at 12:01 AM