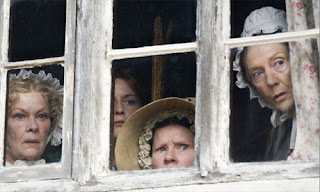 This season of Masterpiece Classic has come to an end, and what an ending it was. After a season of the good, the bad and the ugly, Masterpiece has finally given us the great in Cranford. With a wonderful story, a stellar cast and gorgeous production, Cranford has quickly become a favorite, ranking only behind Bleak House as my favorite Masterpiece adaptation.

Cranford is based on three of novelist Elizabeth Gaskell's novellas (Cranford, Dr. Harrison's Confessions and My Lady Ludlow) and centers around the village of Cranford for a year in the early 1840s. Cranford is a town mostly inhabited by single women,whose social order and lifestyle has stayed the same for many years. The women are satisfied with their lives and would not have them any other way. But change is coming to Cranford and begins to disrupt things in the sleepy town. The first is the arrival of the young and single Dr. Harrison (Simon Woods) from London who quickly brings in new and different forms of medical treatment, and sets many hearts aflutter in the process. The other major change is the arrival of the railroad in Cranford, which threatens the only way of life that its residents have ever known.

There is also a sub-plot being played out at nearby Hanbury Court, the estate of Lady Ludlow (Francesca Annis). Lady Ludlow is facing change, not just in the coming of the railroad, but also in society itself. She holds onto the old belief that members of the lowest class should not learn to read and write, so as to always be aware of their station in life. But her estate manager, Mr. Carter (Philip Glenister), sees things differently and against her orders, takes the son of a local poacher (Alex Etel) under his wing and seeks to free him from a life of poverty through education.

Though the story itself is good, what really makes this a must see is the cast. It's really a "who's who" of British acting. Eileen Atkins is brilliant as the dour and authoritative Deborah Jenkyns who prefers Dr. Johnson to that young upstart Charles Dickens, and would never be caught dead sucking an orange. Judi Dench, who is one of my favorite actresses, plays her sister Matty, who at first is afraid to move without Deborah's approval, but by the end of the film has become more independent. And Imelda Staunton is hilarious as Miss Pole, the town busybody and gossip. Other familiar faces include Greg Wise, Julia Swalha, Alistair Petrie, Michael Gambon, Jim Carter, Claudie Blakley, and Andy Buchan. This cast is faultless and each one makes Cranford seem a little more real.

Ultimately, Cranford reminds us that change is not always dangerous, and that tradition is not always stifling. It also makes us wish for the camaraderie of days gone by, when neighbors knew each other, argued with each other and would lay down their lives for each other. The only problem with this film is that it wasn't nearly long enough. Thank you to the BBC and Masterpiece for ending this season on a high note.

Note: For a limited time you can watch Cranford online. The majority of the cast has also signed on to produce a Cranford Christmas special, due to air in the UK in December 2009.
Posted by bookwormans at 7:53 AM