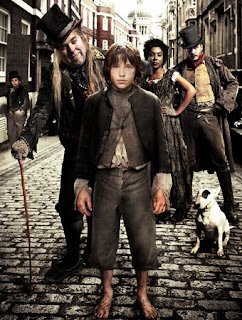 Apart from A Christmas Carol, Charles Dickens' most famous work is probably Oliver Twist. According to The Internet Movie Database, there are at least 20 different adaptations of this story ranging from the earliest in 1909 to the Oscar winning musical of 1968. Now, the BBC and Masterpiece Classic bring us a new version of this classic tale of a young orphan boy.
Overall, I found this to be good, solid storytelling. This version brings out the dark and seedy side of Dickens' tale. There are no toe-tapping, lighthearted musical numbers or sunny-faced, cutie-pie kids. And that is a good thing. Dickens meant for his readers to see the darkness that thousands of people were forced to live in, in the hope that they might be compelled to do something about it. From Mudfog Workhouse to London's underbelly, this adaptation completely immerses us in the dark and dank world that little Oliver was born into.
The acting, while not stunning, was solid. I was especially pleased with the child actors, particularly Adam Arnold as The Artful Dodger. He really embodied the tough little urchin who does what he must to survive, and yet longs for love and acceptance. Timothy Spall brings a gentle, less eccentric touch to the character of Fagin, and Sophie Okonedo brings out the inner conflict of Nancy. And once again, we are treated to the great acting of Tom Hardy as the violent Bill Sikes. I especially loved the scenes when Sikes is running away from London with Oliver after having killed Nancy, and he is constantly haunted by visions of her. It was very much in the vein of his portrayal of Heathcliff in the recent Wuthering Heights.
The rest of the production was good as well, with typical BBC quality in the cinematography, sets, costumes, etc. The music was rather interesting. On the one hand, it's drums and electric guitars didn't seem to fit with the story, and yet it worked in some weird sort of way. In the end, I think it helped keep the film from being too dark and depressing.
If any scene in the film really captures the essence of Dickens' story, it is when the Artful Dodger is walking off after Fagin's hanging. As he moves through the crowded streets with Sikes' dog, Bullseye, he slowly takes on the violent mannerisms of Sikes himself. That is the real tragedy of Oliver Twist; the idea that Dodger, Fagin, Nancy, and even Sikes himself, might have been better people if they had found the true love they were starving for. That is the message Dickens' was trying to send, and that is the message that this adaptation wonderfully portrays. If you have not seen it, you can watch it here through Sunday.
Up Next: An encore presentation of the 1999 film David Copperfield starring Daniel Radcliffe, Ian McKellen and Maggie Smith.
Posted by bookwormans at 6:28 AM