I'll go ahead and admit that I'm a bit of a romantic at heart. I love a good love story, whether it's on the screen or in a book. Though most of the stories have many common elements, each one is still unique in its own way. In honor of today's celebration of love, here are some of my favorite literary couples and what makes their stories great.

Anne and Gilbert were one of my earliest favorite couples. If anyone deserved to get the girl of his dreams, it was Gilbert Blythe. The poor guy put up with a lot from the spunky redhead and finally had to come close to dying to get her to wake up and realize what the rest of us already knew: they were meant for each other. Maybe he should have smacked her with a slate! It takes patience, perseverance, and three books, but we finally get our happy ending.

"I don't want sunbursts and marble halls. I just want YOU."

When I first read this book as a young teenager, I wasn't too happy with the ending. I wanted Jo to marry Laurie. But as I got older and re-read the book (several times), I realized that Marmee was right. While Jo and Laurie were good friends, they would have had a horrible married life. Jo needed someone who could act as an anchor in her life and encourage her to pursue writing not for money, but for herself. Professor Bhaer was perfect for this, and though I still have friends who prefer Laurie, my heart has gone to the kind German.

"Ah! Thou gifest me such hope and courage, and I haf nothing to gif back but a full heart and these empty hands," cried the Professor, quite overcome. Jo never, never would learn to be proper, for when he said that as they stood upon the steps, she just put both hands into his, whispering tenderly, "Not empty now," and stooping down, kissed her Friedrich under the umbrella. 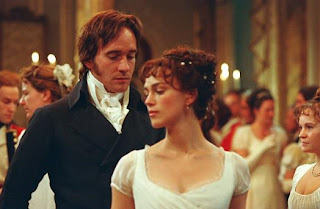 Though I love all of the Austen couples, Elizabeth and Darcy have the most complex and electric relationship. Who else goes from utter hatred to overwhelming love in only 61 chapters? I think that what captures most readers' fascination is the realization that these two people simply can't love anyone else. They were MADE for each other. Whenever I need a good dose of lighthearted romance, this is where I usually turn first.

"You are too generous to trifle with me. If your feelings are still what they were last April, tell me so at once. My affections and wishes are unchanged, but one word from you will silence me on this subject for ever.'' Elizabeth, feeling all the more than common awkwardness and anxiety of his situation, now forced herself to speak; and immediately, though not very fluently, gave him to understand that her sentiments had undergone so material a change, since the period to which he alluded, as to make her receive with gratitude and pleasure his present assurances. 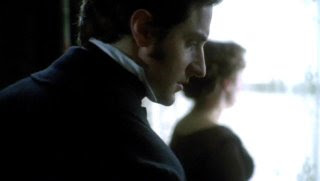 Don't get me wrong, I really like Margaret. She's a very intelligent woman. But she missed what is probably the biggest "Well, duh!" moment in all of literature! Saying yes to John Thornton should have been a no brainer. Oh well. I'll forgive her because she finally gains some sense and accepts him in the end. I don't think any flesh and blood female could have refused a man like that when he was whispering her name in her ear anyway.

'Take care.--If you do not speak--I shall claim you as my own in some strange presumptuous way.--Send me away at once, if I must go;--Margaret!--' At that third call she turned her face, still covered with her small white hands, towards him, and laid it on his shoulder, hiding it even there; and it was too delicious to feel her soft cheek against his, for him to wish to see either deep blushes or loving eyes. He clasped her close. But they both kept silence. At length she murmured in a broken voice: 'Oh, Mr. Thornton, I am not good enough!' 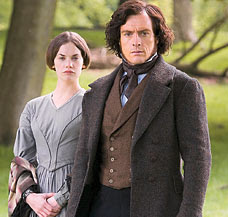 I've said it before and I'll say it again...I LOVE Jane Eyre. Everything about it. In Jane we have an innocent, yet strong and intelligent female who demands our respect. And Rochester is the very picture of the Byronic hero. He's brooding, he's sarcastic, and he's magnetic. Sure he's got a mad wife locked in the attic, and sure he tried to marry Jane when he couldn't do it legally. Despite all this, there is just something that draws Jane (and us) to him. When I'm in the mood for a good romance (or any other mood for that matter!), this is the book I grab first. It's my chocolate!

"My bride is here," he said, again drawing me to him, "because my equal is here, and my likeness. Jane, will you marry me?"
Got a favorite literary couple? Feel free to share, and have a very happy Valentine's Day!
Picture 1: Megan Follows & Jonathan Crombie in Anne of Avonlea
Picture 2: Winona Ryder & Gabriel Byrne in Little Women
Picture 3: Keira Knightley and Matthew MacFadyen in Pride and Prejudice
Picture 4: Daniela Denby-Ashe and Richard Armitage in North and South
Picture 5: Ruth Wilson and Toby Stephens in Jane Eyre
Posted by bookwormans at 12:01 AM

Another favorite couple is Lucy Honeychurch and George Emerson from "A Room With a View". Lucy follows her heart's desire instead of tradition and society's approval in this one.

My favorite literary couple is Jane Eyre and Edward Rochester. HANDS DOWN! Margaret Hale and John Thornton are right behind them.

I think mine are all of yours that I have read the stories of. =) I also love Laura Ingalls and Almonzo Wilder in the Little House series--I don't know why, I just do.

(But you COULD have used a better picture for Elizabeth and Fitzwilliam!)

Some of my absolute favourite couples here! I love Elizabeth and Darcy (you did pick a great picture!), Jane and Rochester & Margaret and Thornton :)