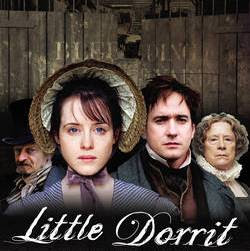 After a marathon run of 5 episodes (8 hours total), Masterpiece Classic finished its showing of the newest adaptation of Charles Dickens' Little Dorrit on Sunday night. Secrets were revealed, villains were brought to destruction, and our hero and heroine earned their happy ending. I really enjoyed it overall. Here are some of my thoughts on the film:

Overall, though it is perhaps not as good as Bleak House, Cranford and North and South, it is still a wonderful production and definitely one of this season's best. Here are some of my favorite scenes:


Up Next: Masterpiece Classic concludes with a new adaptation of Dickens' The Old Curiosity Shop.

Posted by bookwormans at 7:52 AM

I really liked this movie. It is not as good as Bleak House, but still good. I was disappointed in some of the plot, though. First, (like you said) Tattycoram's part, secondly the hidden relationship of Mr.Cadsby and Miss Wade, and third how the Gowans were left hanging.
I really think the best and strongest characters in the story were Mr. Dorrit, Amy Dorrit, Arthur Clennam, and John Chivery.
I also thought that Pancks, Mrs Plornish, Affrey added a little bit of comic relief.
As the for the villain, Rigaud, I thought he was great. He would suddenly appear in, (what seemed like), the weirdest or most confusing times, adding to the suspense.
Overall, it was good, but definitely lacking in areas.