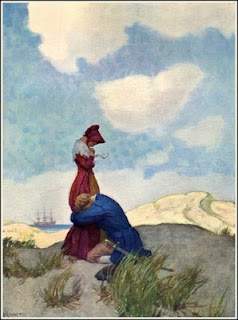 In 1893, Robert Louis Stevenson was living thousands of miles from his native Scotland on the Samoan Islands. Twice he had tried to visit his homeland and twice the trip had been aborted. But though his body was unable to return, his pen was. One year before his death, Stevenson continued the story of the young Scottish Laird and his Jacobite friend in his novel Catriona (known as David Balfour in the U.S.).
The Plot:
David Balfour begins exactly where Kidnapped ends. Now in possession of his inheritance, David is trying to gain justice for James of the Glens who has been arrested for involvement in the Appin Murder. He meets with Lord Prestongrange, the Lord Advocate, to press for James' release. During this time, he also meets (and falls head over heels for) Catriona MacGregor Drummond, daughter of James MacGregor Drummond, an imprisoned Jacobite. But David's attempts to help James of the Glens are thwarted by the Jacobite leader's political enemies and he is again kidnapped and held prisoner until it is too late to help James.
After his release, David travels with Catriona to Holland; he to study at the University of Leyden and she to meet her now free father. Upon arrival, James Drummond is nowhere to be found and Catriona is left penniless and alone. David takes her under his protection until Drummond's eventual arrival. During this time, many misunderstandings occur between the two, driving both Catriona and her father to France. David must now try not only to restore his relationship with Catriona, but also to save his friend Allan Breck Stewart from a horrible betrayal.
My Review (Caution-Spoilers):
It is the bane of all sequels to be compared (either favorably or unfavorably) to their predecessor. David Balfour is no different. It has never been as popular as Kidnapped and many readers describe it as "dull". But while it is true that David Balfour is not nearly as exciting as Kidnapped, it is nevertheless an interesting read with many strengths and weaknesses.
First, Stevenson is wonderful at creating the feeling of Scotland. Edinburgh, the people, even the weather are described in rich detail and really help the reader to sink into the atmosphere of the story. Unlike Kidnapped's sense of immediacy, David Balfour has an almost nostalgic quality to it, something of a yearning for the land of Stevenson's childhood.
Secondly, Stevenson has created in this story something that he never really did in any of his other works: fully-developed female characters. Barbara Grant and Catriona Drummond, though different in many ways, are both wonderful characters with their own strengths, and both play an integral part in the story and in David's development as a character. Barbara helps smooth out his rough, provincial edges and Catriona opens his heart. It is with Catriona, in fact, that we see some of David's maturity from boy to man.
But herein lies one of David Balfour's weaknesses. In Kidnapped, David would have never have made it out of the Highlands without Allan's help. It was very clear who the natural leader of the two really was. In Catriona, David is suddenly making major decisions by himself, using more and more street smarts, and getting himself out of quite a few holes. We expect our hero to grow over the course of a novel, but David seems to do so over the span of a few minutes rather than a few years. This gives a bit of uneveness between the two books.
The other great weakness, to me, was the lack of Allan in the story. You'll remember in my review of Kidnapped that I considered Allan to be the lifeblood of the story. Here he is relegated mainly to the background and I feel that the story really misses some of his dashing bravado.
All in all, it is a good story with wonderful characters and writing, it is just not a perfect sequel to Kidnapped. So the question is, do you have to read it? You don't HAVE to because Kidnapped stands well on its own. But it is still a worthy read if you desire to finish David's story or if you want a a classic Stevenson story with some twists. It is a novel that Stevenson himself was proud of despite its flaws, and rightfully so.
The Movie:
There is no actual adaptation of this novel. Some films combine certain elements of it with Kidnapped, but this never gives you a complete view of the story.
Posted by bookwormans at 6:20 AM