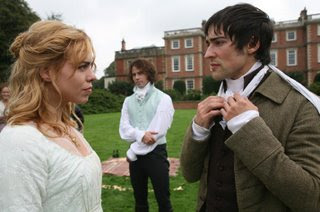 Mansfield Park is not often considered Jane Austen's best novel, in fact it usually ranks on the bottom of most readers' lists. And Masterpiece Theatre's edition is another par-for-the-course adaptation. Once again, the story has been squeezed into 90 minutes, but unlike Persuasion, it's plot fits a little bit better into the time frame.
Overall, it was a very pleasing story with only a few problems that stood out. The role of Fanny Price was miscast, pure and simple. Billie Piper comes across as too modern and does not seem to have the same strong moral character as Fanny. Plus, her hair was everywhere! I don't think there was a scene when it didn't look like she had just rolled out of bed. Another complaint is the wardrobe, the dresses were so low cut that it was distracting. Finally, as in the previous weeks, some important supporting characters were either watered down or cut.
But there were good points as well. The rest of the cast was wonderful, especially Blake Ritson as Edmund Bertram and Hayley Atwell as Mary Crawford. It was also great to see the familiar faces of James D'arcy and Joseph Morgan, and Lady Bertram's little pug just about stole the whole show. The best part of the whole adaption was probably from the "thunderbolt" scene (if you saw it, you know what scene I am referring to) to the end. Soooo sweet! I think that Edmund Bertram is definately going to join the ranks of my sisters' and my favorite leading men.
So next up is Miss Austen Regrets, based on her last two years of her life and her lost loves. Now I all that I have to do is get the rest of my family to turn off the Super Bowl.
Posted by bookwormans at 7:21 AM

To the Blog author:
I hope you will pardon my saying so, but I do not completely agree with your review. Mansfield Park is one of my favorite Jane Austen novels, and this movie adaptation was horrible at best. I thought the story was completely ruined from the start when Fanny's mother sent her away to live with her rich relatives--when in the book the relatives invited Fanny to live with them!
However, you're right about one thing: Edmund. His part was indeed cast well. He was one of the few actors in this film that actually looked like he belonged in the Jane Austen time period!

Unfortunately, I have not read "Mansfield Park", so I was approaching this adaption and review from that perspective. There are very few adaptions of Austen's novels that truly capture the essence of the works (the lone exception probably being the 1995 adaption of P&P). But as I stated in the note at the bottom of one of my other posts, I am not a purist when it comes to movie adaptions of classic lit and can enjoy them for the entertainment that they are. Such is the case with "Mansfield Park", which, if watched without any background knowledge of the story, manages to please. I am sure that once I have read the book, I will find plenty of problems with the adaption. Anyway, thank you for sharing your opinion.

P.S. Yes, Blake Ritson was wonderful as Edmund and I hope that we shall see much more of him in coming Masterpiece adaptions!