The Face is Familiar 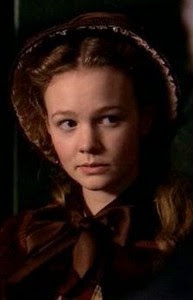 It is that time of year again. The blockbusters of summer are giving way to the Oscar candidates of October. This year, there a is film that is gaining a lot of attention, and one actress in particular. To most Americans, Carey Mulligan is an unknown who has come out of nowhere to steal the "Best Actress" spotlight. Her film "An Education" is getting rave reviews and winning awards at numerous film festivals. But those of us who who watch Masterpiece Classic have been watching Carey for a few years now, and it should have come as no surprise that she would one day catch the world's eye.

Us Anglophiles have been watching her from her beginning as Kitty Bennett in Pride and Prejudice to the sweet and beautiful Ada Clare in Bleak House to the conniving Isabella Thorpe in Northanger Abbey.

Her sudden leap to American stardom does raise an interesting thought. With her potential Oscar nomination, Sally Hawkins' (Persuasion) Golden Globe win last year, as well as Kate Winslet's (Sense and Sensibility) Oscar win, one begins to think that the British are beginning to gain a foothold in the American film industry. And we are not talking just British actors in American films. An Education stars many faces that British Film fans will recognize like Domonic Cooper (Sense and Sensibility), Rosamund Pike (Pride and Prejudice), Emma Thompson (Sense and Sensibility, The Remains of the Day), and Olivia Williams (Emma). Hopefully this will mean that I will get to see more and more of my favorite actors and actresses on the silver screen. Hmmm...Richard Armitage on the big screen...now that's worth a $9 movie ticket!
Posted by bookwormans at 5:12 PM