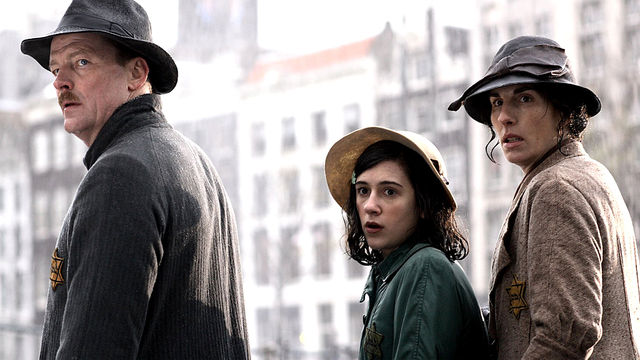 Last year, I had the opportunity to visit the US Holocaust Museum in Washington DC. The part that had the most impact on me was the room full of nothing but shoes. Hundreds of them. Silent witnesses of the atrocious deeds done by Hitler's regime. My mind instantly wondered over the dozens of Holocaust stories that I had read, each one so different, yet still the same. 6 million victims...6 million stories. But there is one story that everyone who knows, even if they haven't spent much time studying that enormous tragedy. The story of a young girl on the brink of womanhood, who spent two years cramped in a small annex hiding from the Nazis. The story of Anne Frank.

The 2009 BBC adaptation stars Ellie Kendrick in the role of Anne, the young Dutch girl whose famous diary records her two years in hiding. Other stars include Iain Glenn (Kidnapped), Tamsin Greig (Emma), Felicity Jones (Northanger Abbey), and Nicholas Farrell (Chariots of Fire). The film focuses only on the years recounted in the diary, from when she first receives it until she and the others are discovered and hauled off to the concentration camps. It is a gritty, yet moving and artistic re-telling that brings this story to life in a way many other adaptations never have.

The greatest thing about this particular adaptation is that it allows Anne to be Anne. She is no longer a symbol of millions or the face of the Holocaust. She is simply a girl who is trying to grow up under the most extreme circumstances. She's on the brink of womanhood, and she is trying to figure out life. She struggles in her relationship with her parents, she wonders about the changes going on inside her, and she dreams and hopes for the future. She is what all of us grown up women remember being. Ellie Kendrick does an amazing job with this complicated character. On the one hand, she is spoiled and somewhat insensitive, and yet on the other hand she has a spirit and understanding that cause us to love her in spite of it all. This version really made the story about Anne, and not just about her unfortunate ending.

I also liked how this version opened up the other characters to you in a way the diary didn't. You didn't always agree with the characters, but you at least understood them. You understood the pressure that Margot felt being the elder sister. You understood the toll that the ordeal took on a dependent person like Mrs. Frank. And you understood Mr. Dussle's longing and frustration that often caused him to fight with Anne. It really opens up your eyes to the flaws in each of us, and to not only how much we must put up with in others, but also what they must put up with in us. On top of this, the sets, the music, and the script (which included direct quotes from the diary) were all of the superb quality we expect from the BBC.

My tears flowed freely as the film ended with the Franks and everyone else walking down the stairs to their doom. Though I have read the stories and seen the pictures of the tragedy that was the Holocaust, something about this film really brought it all to life and touched me in a different way. Anyone who has read the diary or who has any interest in the Holocaust should see this adaptation. I think that it really does justice, not only to the millions who died, but to Anne herself. The girl, the writer, the artist.
Posted by bookwormans at 5:55 PM