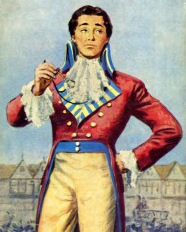 Ok, so this week is open season Weekly Geeks and we can pick whatever old Weekly Geek challenge we would like to do. I dug through the archives and found one that I am dying to try:
Many of us have had an opportunity to interview an author, mostly through email, but perhaps even on the phone or in person. In fact, many of you have become experts at author interviews. So this week, let's pretend that we can get in contact with one of our favorite characters and interview them. What would you ask Mr. Darcy if you could send him an email. What would his answers be like? What would you say if you could just call up Liesel or Rudy from The Book Thief and ask them anything? How would they answer your questions? What if you could invite Jo March or Anne Shirley to lunch, what would the conversation be like?

Thanks to B. J. Harrison over at the Classic Tales, I was finally introduced to someone I have been dying to meet for a very long time: The Scarlet Pimpernel (or Sir Percy Blakeney, Bart.). After a bit of begging on my part, Sir Percy has now agreed to do an exclusive interview with Complete & Unabridged.

C&U: First off, I would like to thank you, Sir Percy, for agreeing to this interview. I'm sure my readers, like myself, are simply dying to ask you some questions.
PB: "Odd's life! but you are very welcome m'dear. I'm always happy to oblige a fan, especially over a glass of good wine. Not to mention, it gives me ample opportunity to allow the general public to observe the very latest in good fashion.

C&U: So, what exactly was it about the French Revolution that made you decide to risk your life in saving many members of the aristocracy?
PB: Oh yes, those poor devils. Well, anyone can see that the whole situation was demmed monstrous. I mean, we all know that his Royal Highness the King of France was not exactly the smartest fellow in the class, but was that any reason to chop off the heads of the leading members of society? Just look at our King. He's certifiably off his rocker, but you don't see our tailors and cooks and cabmen running about chopping off everybody's heads because of it. Zounds! C&U: After so many daring and brave escapades across the channel, does it ever annoy you that everyone back in England still considers you to be hopelessly idiotic?
PB: La, m'dear. Did you really think that would bother me? Not only have I millions of fans around the world and a band of 19 men who would lay their lives down for me instantly, but I have the supreme delight of playing an enormous joke on London society. Also, if all those young bucks want to admit that "the cleverest woman in Europe" was seduced by the charms of a "demmed idiot" and not them, well, that's their privilege.

C&U: And speaking of Marguerite, I know that all of us females are simply dying to know what exactly happened on that trip back across the channel. What was it like allowing yourselves to trust and become reacquainted with one other?
PB: Lud love you females! Do you think that just because every other celebrity out there likes to tweet the details of their love lives on the world wide web means that I'm going to? Suffice it to say, 'twas a dream on the Daydream. And a demmed good one at that! C&U: Overall, you appear in 11 novels and 2 short story collections, but you were also a part of The League of Extraordinary Gentlemen. Tell us about that experience.
PU: Well, I had always planned on living a somewhat private retired life, but when one is asked to work with the likes of Peter Blood, C. Auguste Dupin, Captain Nemo, and Jeeves, one simply does not refuse. Yes, we had some good times, although I must say that Sherlock Holmes and Capt. Nemo were demmed rude to me. Whenever the others asked me to recite my poem, they would suddenly strike up playing that demmed violin and organ of theirs. Something about my poetry not being good enough for their highbrow tastes.

C&U: Well, we certainly like your poetry. Would you be so good as to recite your famous poem now?
PB: Begad! I'm surprised you hadn't asked me before. "The Scarlet Pimpernel" by Sir Percival Blakeney, Bart.

They seek him here, they seek him there
Those Frenchies seek him everywhere.
Is he in Heaven? Or is he in Hell?
That demmed, elusive Pimpernel!

C&U: And what about Chauvelin, your archenemy? Have you heard anything from him recently?
PB: La! No, I have not heard anything recently. In fact, the last thing I heard was that he had caught a demmed nasty cold while waiting to catch me at the wrong creek. Poor chap.

C&U: Well, again I thank you so much for your time, Sir Percy. As a final question, could you tell us what you are doing now in semi-retired life?
PB: Oh, you know, the same sorts of things that I was doing in the novels. Driving the horses by moonlight, attending fancy balls, playing cards with the Prince of Wales, trying on new clothes, drawing scarlet pimpernels on the corners of napkins, etc. Odd's life, but you didn't think I was going to change with time did you? I'm a demmed classic!

If you have a question for Sir Percy, just leave it in the comment section. He'll be available all week to answer.
Posted by bookwormans at 1:53 PM