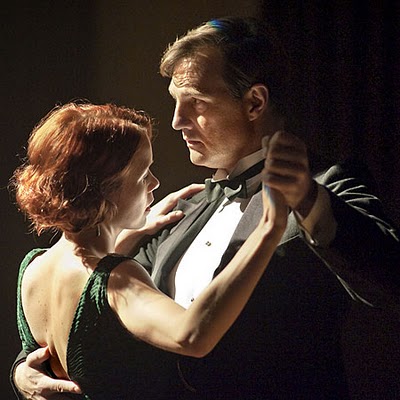 As the 2011 season of Masterpiece Classic draws to a close, the people at PBS & BBC reach to the back of the shelf to bring us an adaptation of a lesser known British novel. Published in 1936, this novel is by Winifred Holtby, a journalist and close friend of pacifist author Vera Brittain, and is set in her home county of Yorkshire. Andrew Davies, writer of Pride and Prejudice, Wives & Daughters, and Bleak House, brings his creative talents to this new re-telling.

It is 1934, and Sarah Burton (Anna Maxwell Martin) is one of "the surplus two million", a term given to the young British women of the time who never married, presumably because of the shortage of young men in the aftermath of WWI. But Sarah is determined to not simply be "surplus". She brings her radical view of education back to her childhood home of South Riding where she becomes headmistress of a local girl's school. Though she soon finds allies in socialist Joe Astell (Douglas Henshall) and progressive Alderwoman Mrs. Beddows (Penelope Wilton), not everyone is thrilled with Sarah's new ideas. Local landowner Richard Carne (David Morrissey), burdened by his own guilt and difficulties, is especially put off by her exuberance. But as Richard sees the changes that Sarah is making in the lives of his troubled daughter, Midge, and the bright but poverty-stricken Lydia Holly, both he and Sarah begin to wonder if they might not find some common ground, despite their philosophical differences.

I was completely ignorant regarding this novel before seeing this series, so I went into the whole thing not really knowing what to expect. My reaction? I didn't really like it. Once again, I can't really fault the production qualities. Each actor was good in their own part. Martin did a wonderful job at portraying an exuberant, if romantically frustrated, young woman and Morrissey captured the earthy English landowner as only he can. And the cinematography of the Yorkshire coast is breathtaking to say the least. It was, in essence, the story that I couldn't connect with. Not having read the book, I'm not sure if the fault lies with Holtby or Davies. It seems like South Riding just can't seem to figure out exactly what story it is trying to tell. Is it a thwarted romance between two very different people? Is it a story of the human affects of war? Is it a story of the necessity of eliminating the chains of poverty? Is it a story of political corruption? In reality, it is all these things, and in trying to tell so many different stories, it doesn't tell any of them particularly well.

Perhaps the biggest story within the story is how much of a drag husbands and families are on women. With Carne's death, Midge is "released" to become a wealthy and happy girl, Sarah is able to move on and achieve true worth in her role as teacher, and Muriel Carne is finally able to come home. And Lydia Holly achieves her happy ending only after she is rid of her responsibility to her father and siblings. Not being much of a feminist myself, this "men are the problem" tone did not settle to well with me, and left me somewhat unsatisfied with the story overall.

Though it was a well done program overall, it just wasn't for me. Not being able to connect with the story really affects my feelings for a film. It might be one that others will enjoy, but for me, this is a story that deserves to be put back on the shelf.
Posted by bookwormans at 1:15 PM

I started to watch this series, but felt uncomfortable almost immediately with the feminist tone. I don't mind strong women protagonists, but I dislike propaganda that tries to "educate" women by teaching that men are superfluous.