Charlemagne: Father of a Continent 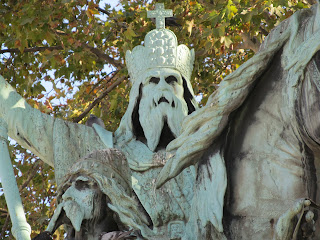 Of the thousands of ancient rulers throughout history, only a few continue to be remembered even a millennium later. Ramses, Solomon, Alexander, and Augustus. After the fall of the Roman empire, western Europe was left in a power vacuum with thousands of small kingdoms being ruled over by various warlords. In the 8th century, one man would rise and unite the majority of western and central Europe for the first time since Rome's fall. He would also foster a revival of art, culture, and religion in a time when these things had fallen by the wayside. That man was Charles the Great...Charlemagne.

Italian historian Alessandro Barbero has written an extensive biography, not only of Charlemagne's life, but of the world he created. In Charlemagne: Father of a Continent, we follow Charlemagne on his attempts not only to conquer the Saxons, the Avars, the Lombards, and the Slavs, but also to integrate them into Frankish culture mainly by the forcible conversion to Christianity. We see the political side of his life as he deals with various Popes and is eventually crowned Holy Roman Emperor. And we also take a deep look at the administration of the Frankish kingdom and how it affected the lives of its citizens from the highest nobles and churchmen to the lowest peasants.

Overall, this was a very interesting read. I only knew a few basic things about Charlemagne from my high school history books, and this helped me gain an appreciation for his accomplishments and his place in history. I think one of the most interesting aspects of the book was Barbero's assertion that Charlemagne really was the "Father of Europe". According to Barbero, the modern European identity and in some ways the European Union traces its roots back to the Carolingian period. I also found it fascinating just how much of the credit of Christianity's survival in Europe belongs to Charlemagne. He was the "Christian King" and in his mind was charged by God to be the protector of the new "chosen people" which led to many laws and reforms that helped foster Christianity among the various "pagans" of Europe. Though I appreciated the depth that Barbero gives of the Frankish kingdom, it wasn't exactly easy reading. There is a very "scholarly" tone to the work that can make it kind of difficult to really get into the book. Not to mention there is so much information to absorb that it can be kind of overwhelming at times.

I do recommend this book if you are looking for a deeper understanding of Charlemagne's Europe and how it translates to modern Europe. Barbero really gives us quite a bit of meat to sink our teeth into. However, this may not be for you if just want a basic idea of Charlemagne's life and accomplishments. It ultimately depends on what you are personally looking for.
Posted by bookwormans at 12:30 AM