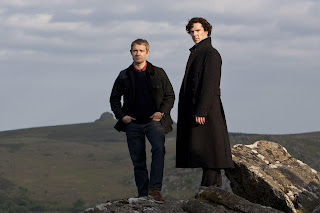 It's been almost two years since the Masterpiece Mystery crowd was swept off our feet by a modern adaptation of the classic Sir Arthur Conan Doyle Sherlock Holmes stories.  I fell head over heels for these stories and have been eagerly awaiting the 2nd series since the credits began to roll on the last episode of Series 1.  And I have to say that creators Mark Gatiss and Stephen Moffat completely outdid themselves in this new series.  If anything it is even more brilliant, funny, and refreshing than the first.

Benedict Cumberbatch and Martin Freeman reprise their roles as Holmes and Watson respectively, and they are INCREDIBLE!  Freeman especially seems to bring Watson into his own and their friendship continues to evolve in a very realistic way.  We also see the return of Andrew Scott who takes Jim Moriarty from kooky villain in Series 1 to evil genius in Series 2.  This series takes three of the most famous Sherlock stories and brings them into the 21st century.  Sherlock meets his match in the form of Irene Adler in A Scandal in Belgravia.  Sherlock and Watson travel to Dartmoor to investigate strange happenings at  a military base in The Hounds of Baskerville.  And the fight between Sherlock and Moriarty comes to a head as Moriarty sets out to show Sherlock as a fake in The Reichenbach Fall.

I enjoyed all three episodes immensely.  It was incredible to see how they were able to take these well known stories and update them for today's audience, and yet stay true to the spirit of the originals.  The final episode was especially brilliant and had me on the edge of my seat the entire time.  Gatiss and Moffat have done a superb job of not only moving the story line forward, but also moving the characters forward.  Each one, no matter how minor, has been given an added depth from the previous series.  And the relationships between each one becomes more and more complex.  And even with the heavy drama of the cases, their is still plenty of humor to liven things up.  Here are some of the best quotes from Series 2:

-Mycroft Holmes: Just once can you two behave like grown-ups?
Watson: We solve crimes, I blog about it and he forgets his pants. I wouldn't hold out too much hope.

-Mycroft Holmes: We are in Buckingham Palace, the very heart of the British nation.  Sherlock Holmes, put your trousers on!

- Watson to Sherlock:  I always hear "punch me in the face" when you're speaking, but it's usually subtext.

-Sherlock: Think!  It's the new sexy!

-Watson: Did we just break in to a military base to investigate a rabbit?

This is definitely one of the freshest, smartest series on Masterpiece (or any other program/network) right now.  If you haven't seen any of this series yet, listen to Moriarty and "Get Sherlock"!

Series two was FANTASTIC! Have you heard who the villain is going to be for series three? I won't spoil it in case you haven't but I'm very excited. He comes from one of my favourite Sherlock Holmes stories... BTW I'd love to know where you got that "You're Jane Eyre" button on your blog. Is it from some kind of literary heroine quiz?

I haven't heard who the new villain is...I'm trying to ignore spoilers as much as possible. Though I'm sure it won't be easy (it was really difficult to make it through the 3rd season of Downton Abbey without major spoilers).

Yes, the Jane Eyre Button is the result of a literary heroine quiz. It took some digging, but I finally found it: http://quizilla.teennick.com/quizzes/877803/which-classic-female-literary-character-are-you

Ooh, I'm so glad I didn't write who it was then! And thank you so much for finding that quiz for me! I got Elizabeth Bennet and I've put the image result on the blog even though it clashes with my Marianne Dashwood result from another quiz : )