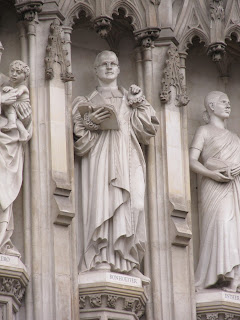 The story of Dietrich Bonhoeffer is one that is familiar to many, but for different reasons.  Academics often speak on the literary qualities of his collection Letters and Papers from Prison.  Theologians admire and debate his works of theology like Ethics or The Cost of Discipleship.  And historians recount his role in the failed plot to assassinate Hitler.  But who was Dietrich Bonhoeffer really and how do all of these various roles come together in his life?  In his compelling biography, Eric Metaxas strives to tell Bonhoeffer's story and bring together the many facets that made him so remarkable.

For those of you who may not be familiar with him, Dietrich Bonhoeffer was a German theologian and pastor.  He was born in 1906 and by the age of 21 he had earned his doctorate in theology from the University of Berlin.  He pastored congregations in other German cities and Barcelona, and even spent a year at Union Theological Seminary in NYC.  As the Nazi's rose to power, Bonhoeffer tried to wake the German church up to the atrocities that were going on, and eventually he became involved with the German resistance.

Bonhoeffer: Pastor, Martyr, Prophet, Spy describes every aspect of Bonhoeffer's life from his somewhat idyllic childhood in a traditional yet intellectual family to his years spent doing theological battle with fellow Christians, to his decision to become involved in a plot to assassinate one of the most evil men in history.  Metaxas tells this story passionately, and his writing is thorough yet easy to read.  Though I had read some of Bonhoeffer's works and was pretty familiar with his story, this book gave me a greater understanding of the man and the many ways he contributed to the world around him.  I think one of the newer things that struck me about him was the boldness he had in facing not only the Nazi government, but also the church itself.  The very people who should have been sounding the alarm when Hitler first came to power were the ones welcoming him and hoping to have influence over him.  Bonhoeffer was one of the few churchmen who called Hitler out and encouraged the church to take a stand for what was right.

His relationship with his family and friends was also a new aspect for me.  He seemed to be a very genuine person and though earnest in his beliefs he was nevertheless open and loving to those around him.  I also loved how both the traditional religious beliefs as well as the modern intellectualism of his family life came together to create someone who held firm to his beliefs and used reason to convince others.  He was a truly unique person in whom so many different qualities came together to create someone all of us can learn from.

Though this book is about a theologian and from a Christian perspective, it is a wonderful story for anyone who loves history and reading about inspiring people.  I highly recommend this biography and suggest that when you are done you give Bonhoeffer's own works a try.
Posted by bookwormans at 6:32 PM