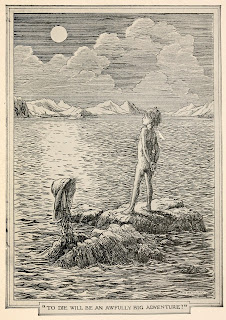 “Never say goodbye because goodbye means going away and going away means forgetting.”

For most of us, the story of Peter Pan is one we become very familiar with at a very young age.  Whether it is through the classic Disney film version or the equally famous Broadway version, we each know the story of the boy who never grew up.  But while we may feel like we know the story, if you have not read the original work, chances are you don't know everything.  Barrie's story is one of childhood and magic, but there is also a sinister side that many modern adaptations leave out.

The Darling family, including children Wendy, John, and Michael, lives in a nice little house in the Bloomsbury neighborhood of London.  One night when Mr. & Mrs. Darling are at a party, a mysterious boy appears in the nursery.  He is revealed to be Peter Pan, a boy who lives in Neverland and refuses to grow up.  He has been secretly visiting the Darling home at night to listen to Mrs. Darling's stories.  He invites Wendy to come to Neverland with him and be mother to him and his gang of "Lost Boys".  She accepts and soon she, John, and Michael have been taught to fly (with the help of the fairy Tinkerbell) and are soaring towards Neverland.

That is only the beginning of the many adventures the children find there.  They encounter mermaids, Indians, and a clock-swallowing crocodile.  But nothing prepares them for their encounter with Peter's greatest enemy, Capt. James Hook and his band of ruthless pirates.  Will the children be able to defeat the thugs and return home, or are they doomed to walk the plank?

I have been familiar with the Peter Pan story all of my life, but I have only now read the book.  It surprised me in many ways, both at how familiar it was and also by how much darker it was to the story I remembered.

Overall, it is very much the story that you remember.  Barrie's writing is great and the story is one of almost non-stop adventure.  Everything that catches children's imaginations is found here from mermaids and Indians to pirates and crocodiles.  There is also an almost palpable sense of magic throughout the story and Neverland is certainly the center of it.  And Barrie's descriptions only add to the sense of beauty and magic.  "If you shut your eyes and are a lucky one, you may see at times a shapeless pool of lovely pale colours suspended in the darkness; then if you squeeze your eyes tighter, the pool begins to take shape, and the colours become so vivid that with another squeeze they must go on fire."
There were some things that surprised me and that will probably surprise many parents who choose to read it to their children.  This isn't the squeaky clean Disney version.  There is a bit of violence, with most of it coming from the children themselves, as well as a romantic aspect that isn't always portrayed in the film versions.  And in describing children as "innocent and heartless", Barrie highlights the cruelty that children posses.  The children lack the sympathy and sense of responsibility that comes with growing up.  Peter completely ignores the needs of "his" Lost Boys and the children don't express any concerns for the feelings of their parents.  This all leads to Barrie's main theme that while childhood has many great qualities, it also has an element of tragedy.

All in all, Peter Pan remains a classic read for all children.  Though there are a few elements that parents may want to discuss with their children, it is still one that I recommend be read to them.  No film version can substitute for the original.

There have been many adaptations of this classic story, but three of them stand out for most modern audiences.  The first is the 1953 Disney version starring Bobby Driscoll, Kathryn Beaumont, and Hans Conreid.  This version is pretty faithful to the story (if not the tone) of the original and remains a classic children's film.

There is also the 1960 NBC broadcast of the stage musical starring Mary Martin and Cyril Ritchard.  I was shocked at how close this version followed the original story.  Most of the dialogue is pulled straight from the book.  I loved this version as a child and consider it a must see for all fans of Peter Pan.

The other major adaptation is the 2003 version starring Jeremy Sumpter, Rachel Hurd-Wood, and Jason Isaacs.  I haven't seen this version, but it has received generally positive reviews.
Posted by bookwormans at 12:30 AM

This book has always been a favorite of mine.