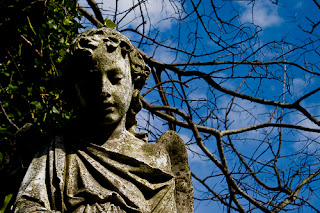 The Christmas Box wasn't written to end up #1 on the New York Time's Bestsellers list, but that is exactly where it found itself in 1995. Richard Paul Evans wrote this simple yet poignant Christmas story for his daughters and self published it for a few family friends back in 1993. Little did he imagine that his story would spread to millions of people around the world.
The Plot:
Richard Evans is a young father and entrepreneur living in Utah. He has become a partner in a new business venture and is working feverishly to get his family ahead. When the opportunity comes for Richard, his wife Keri and their three year old daughter Jenna to become a live in family with an elderly lady in her Victorian mansion, they jump at the chance. The Evanses and MaryAnne Parkin become fast friends and soon they all feel like one family.
But Richard has begun to work more and more, and with the holiday rush on he is unable to spend as much time with Keri and Jenna as they would like. Then Richard begins having dreams, dreams that lead to the discovery of a mysterious Christmas box filled with aged letters to an unknown "Beloved". And Mary has begun acting strange as well. She has periods of sullenness and is earnestly entreating Richard to answer the question "What was the first gift of Christmas?" Richard must now find for himself the answer to that question, an answer that will change his life and also that of his family's.
My Review (Caution-Spoilers):
At first, The Christmas Box can seem like just another one of those overly sweet and stifling stories that seem to fill this season. But there is a deeper meaning hidden in this simple yet profound story and it centers around the answer to the question that Mary poses to Richard. "What was the first gift of Christmas?"
At first Richard gives a flippant answer, but then he sees that Mary considers this question the most important one that he will ever answer. It isn't until Richard learns of the pain that Mary has suffered for many years that he receives his answer and is able to see the error he is making. Through Mary and the poignant letters that fill the Christmas box, Richard comes to realize that the first gift of Christmas was a child. "For God so loved the world that he gave his one and only Son, that whoever believes in him shall not perish but have eternal life." John 3:16.
The years of childhood are precious, not only to the child, but also to parents. It is an innocent time that can never be recaptured and is often too easily missed. Richard had focused on making alot of money for his family to enjoy later in life. What he had failed to realize, however, was that one of the most precious times that he had been given was slipping away right under his nose. Mary had seen it happen in her own life, and she loved the Evanses too much to see it happen in theirs. "She knew that in my quest for success in this world I had been trading diamonds for stones. She knew, and she loved me enough to help me see."
Ultimately, The Christmas Box takes us beyond what this world calls happiness and success, and instead shows us the things and the people that really matter can often be found just down the hall or across the dinner table. This is a story that reminds all of us to slow down and enjoy the time that we have with our families and loved ones and to remember that the greatest gift ever given came in the form of a baby boy, given up by his Father that we might be reconciled and saved from ourselves.
The Movie:
In 1995, The Christmas Box was released as a television movie and eventually on to video. It stars Richard Thomas, Annette O'Toole and the wonderful Maureen O'Hara. The first time I ever saw it, I was about 10 and was having a Christmas slumber party with a few of my friends. The movie gripped us from the very beginning and we stayed up until 1 am just to find out how it ended. It is a great family film and has become one of my favorite Christmas movies of all time.
Posted by bookwormans at 11:25 AM