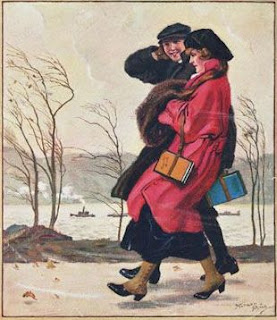 Winter is definitely one of the best seasons for reading. There are few things on this earth as delightful as curling up with a blanket, a hot cup of tea and a good book. And this winter, my reading list is rather long. I won't bore you with the entire thing (mainly because I can't remember them all) but I will give you the highlights.
New Books:
When Knighthood was in Flower by Charles Major:
Set during the Tudor period of English history, When Knighthood Was in Flower tells the tribulations of Mary Tudor, a younger sister of Henry VIII of England who has fallen in love with a commoner named Charles Brandon. However, for political reasons, King Henry has arranged for her to wed the King Louis XII of France and demands his sister put the House of Tudor first.
The Remains of the Day by Kazuo Ishiguro:
Tells the story of Stevens the butler who dedicated his life to the service of Lord Darlington. Stevens' new employer, a wealthy American, Mr. Farraday, encourages Stevens to borrow a car to take a well-earned break, a "motoring trip." As he sets out, Stevens has the opportunity to reflect on his unmoving loyalty to Lord Darlington, the meaning of the term "dignity, and his lost relationship with Miss Kenton, an ex-coworker. Stevens muses over lost opportunities, both with Miss Kenton and with his long-time employer, Lord Darlington.
The Merry Adventures of Robin Hood by Howard Pyle:
Pyle's distillation of many Robin Hood legends and ballads, modified to make them suitable for the child audience he sought to appeal to.
Ashenden, or the British Agent by William Somerset Maugham:
Inspired by Maughams's own experiences as a British secret agent in World War I, this series of stories features a fictional spy, John Ashenden, whose dangerous assignments entangle him with traitors, assassins and beautiful but treacherous women.
Father Brown Mysteries by G. K. Chesterton:
Father Brown is a fictional detective created by English novelist G. K. Chesterton, who stars in 52 short stories, later compiled in five books. Unlike the more famous fictional detective Sherlock Holmes, Father Brown's methods tend to be intuitive rather than deductive
Re-reads:
Ishmael by E. D. E. N. Southworth:
Ishmael Worth enters life motherless and poor, and despite the wishes of everyone around, he survives and flourishes in his paltry environment. His commitment to character and integrity and his singular focus on preserving his mother’s name give his life focus and purpose. His perseverance and determination to educate himself in law give him the opportunity to influence the highest levels of government. E.D.E.N. Southworth captures the rich panorama of sights and sounds in rural Maryland in the decades prior to the Civil War.
The Inheritance by Louisa May Alcott:
Written at the tender age of 17, Alcott's first novel tells the story of the Italian orphan Edith Adelon and her life with the Hamilton family in England. Her gentleness, kindness and loving spirit help her to overcome the evil plots of the jealous Lady Ida and win the love and respect of the dashing Lord Percy.

The weather outside might be frightful, but the fire and my book will be utterly delightful! So take this season to enjoy a great book on a frosty winter's day!
Posted by bookwormans at 7:43 AM

Nice. I'm going to the library Monday to get some books for the next two weeks. Probably a mix of theological stuff and classic fiction. We're also going to read A Christmas Carol this Christmas. See 'ya.