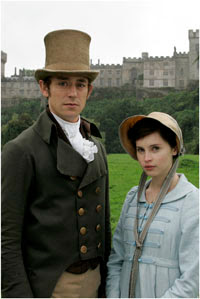 After a rather disappointing adaptation of Persuasion, my expectations for last Sunday's Northanger Abbey were much lower than before. However, Masterpiece Theatre has redeemed itself, at least for the time being.
Admittedly, if any of Austen's novels could be effectively squeezed into 90 minutes, it would be Northanger Abbey. There is alot less back-story and character development and also a pretty simple plot compared to the rest of her creations.
This version sticks to the plot pretty well and also keeps Austen's intentions for the novel intact, in that it ridicules the sensational novels of the time. Felicity Jones is sweet as the young and naive Catherine and JJ Feild is a likable and charming Henry Tilney. As in Persuasion, the supporting characters are a little lacking in depth, but somehow it is more forgivable here.
Overall, it was pleasant way to spend a Sunday evening. Northanger Abbey's simple and charming plot is kept intact and doesn't seem as rushed and hurried as Persuasion did. So, the count is 1-1 for Masterpiece Theatre. Up next: Mansfield Park
Posted by bookwormans at 6:49 AM

After reading NA for the very reason that it is one of Austen's shorter books, the older movie version was not recommended to me, and I have never seen it. The book was not one of my favorites but probably deserves a reread - especially after seeing MT's version which I did enjoy. So many books, so little time.