When Knighthood was in Flower Forbidden love; it's probably one of the most used plot themes in all of literature. From Romeo and Juliet to Wuthering Heights, many books have explored the relationships of people who feel drawn to each other and yet are kept apart, either by their own rationale, the wishes and expectations of those around them, or simply by their station in life. When Knighthood was in Flower is one such story, where two young people must fight against their circumstances in order to gain the happiness they so desire.

The Plot
Mary Tudor is the charming, witty and beautiful younger sister of King Henry VIII of England. All of her life, Mary has been used to getting whatever it is she wants by whatever means she can. She has seen so many men fall at her feet and profess a great love for her (and her beauty, rank, wealth etc.) that she now considers the love of a man cheap and worthless. Enter Charles Brandon, a handsome and dashing young man who has been brought to court, not for wealth and rank, as he possesses neither, but for the many brave and noble feats he has accomplished both in England and abroad. Charles is not one to fall for just any pretty girl, and is initially rather cool with the spoiled Mary. This infuriates her, and yet at the same time she is intrigued by him. Slowly but surely, both Mary and Charles begin to see an attraction growing between them.
About this time, Henry decides to marry his little sister off to King Louis XII of France as a strategic political alliance. Mary's opinion is of course not considered and the negotiations begin at a swift pace. Now, Mary and Charles, with the help of Sir Edwin Caskoden (Master of the Dance) and Jane (Mary's Lady-in-Waiting), must risk everything in order to escape Henry's plans and to attain the life that both of them so desperately want.
My Review (Caution: Spoilers!)
While When Knighthood was in Flower is an engaging and romantic story, it isn't exactly what one would consider great literature. The story is told from the perspective of Sir Edwin Caskoden, the Master of the Dance in Henry's court. This is a rather limiting approach to take, but it could have been done if Charles Major could only make up his mind as to whether or not Sir Caskoden is an omniscient narrator. We are constantly told of meetings and conversations between Charles and Mary, yet are unable to participate them because Sir Edwin was not there. But at the same time, Sir Edwin goes on and on about Mary's inner feelings and conflicts which he could know nothing about unless he was an omniscient narrator. So we are left to wonder, is Sir Edwin always "there" or not?
The other thing that continued to bug me as I read the story was Sir Edwin's continuous interjections of his love for Lady Jane. He will be describing a passionate scene between Charles and Mary, their trials, their love and has he ever told you how much he loves Jane and why does she play so coy with him and did he tell you about her gorgeous eyes and blah blah blah blah.... If I wanted to know so much about his relationship with Jane, then I would have read a book on their relationship. But this book is supposedly about Charles and Mary, so for heaven's sake quit interrupting at the most inconvenient places!
But enough complaints, there were some good points to this story as well. Both Charles and Mary are fairly well developed characters and though you may at times feel a certain loathing for their actions (especially Mary's) you never really quit hoping and praying for a happy ending for them. And what Charles Major lacks in writing style, he makes up for in his history. The setting is extremely believable and there is nothing (that I could see) that sticks out as a huge historical error. Major even reveals a few little known customs of the Tudor period in England.
All in all, this is the kind of book you would expect when a history buff writes a romance. Although it ranks nowhere near the classic romances of say Hugo or Scott, it is still a lovely story, perfect for those lazy afternoons when all you desire is a gentle, breezy plot, characters you can root for, and a very happy ending.
The Movie
This is one of those stories that seems to be made for the big screen. It was adapted as early as 1908, but it's most famous adaption is probably the 1953 Walt Disney adaption The Sword and the Rose starring Richard Todd, Glynis Johns and James Robertson Justice. This adaption remains pretty true to the story while making the plot a bit more concise and also giving it a real villain in Lord Buckingham. The acting is good, the costumes outlandish, and Mary's witty tongue remains firmly intact. A great family film, whether or not you have read the book. 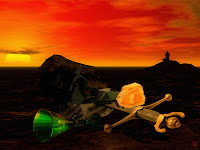