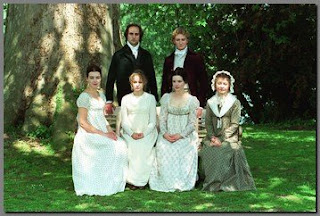 I must make a confession. I have never read Emma, nor seen any adaptations of it (until last Sunday night). I know, I should probably be as intimately acquainted with Miss Emma Woodhouse as I am with Jane Eyre, Elizabeth Bennet and Jo March, but unfortunately I am not. I hope to remedy this in the not too distant future. This makes me very uncomfortable in giving this review. As with Persuasion and Mansfield Park, I shall have to attempt to review this program for it's cinematic value, and then follow up once I have read the book.
My overall verdict is that...I liked it. I knew enough about the story to know that Emma is not the sort of person that you warm up to immediately, so I went into the program with an open mind.
Kate Beckinsale is a lovely actress, and I think that she played Emma with the right balance of pride and charm. While she did say and do some rather mean things, she seems to be rather clueless about it and once it is pointed out to her, she seeks to change herself.
I also enjoyed Mark Strong as Mr. Knightley. I have read some reviews that label him the "Angry Knightley", and sometimes his indignation can seem a little over the top (as in the haircut episode). But I think that this also allows us to see how much he really loves Emma, in that he tries so hard to correct her faults when no one else has the guts to. One of my sisters was a little weirded out by the age difference (mainly the "I held you in my arms when you were three weeks old" line), but I have grown rather accustomed to age differences in literature, so this didn't really bother me.
Some of the other characters/actors that caught my eye were Samantha Morton as the sweet, yet rather naive Harriett Smith, Prunella Scales as the constantly talking Miss Bates, Ray Coulthard (btw, he portrays Young Scrooge in The Muppet Christmas Carol) as the dashing Frank Churchill, and the lovely Olivia Williams as the accomplished, yet shy Jane Fairfax.
This adaptation was lovely. My only regrets are that it wasn't long enough and it probably could have used a bit more humor. Anyway, it has definitely made me want to read the book, which makes any film a success.
Posted by bookwormans at 7:44 AM