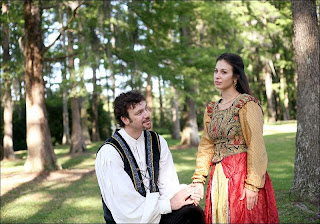 Last Friday evening, I had the opportunity to see a local production of Shakespeare's classic play The Taming of the Shrew. It was wonderful to be able to relax in the newly renovated amphitheatre, with a cool breeze blowing over the lake carrying the scent of wine, cheese and bug spray. This is the third year that I and some of my family have attended these annual productions, and all of them have been really enjoyable. Even my dad, whose idea of great entertainment consists mainly of watching The Three Stooges, has enjoyed them (though he would never openly admit it). Though reading Shakespeare's works is all well and good, nothing can compare with seeing it performed. His vivid characters and witty dialogues come alive and help you to see why his works have been so popular for centuries. If you have never seen a Shakespeare played performed, I would greatly encourage you to do so. Many states and cities have annual Shakespeare festivals and productions. If you have seen productions of Shakespeare's works, which ones were your favorites (mine was Loves Labours Lost)? Which ones would you like to see but haven't? Have you ever been disappointed in a Shakespeare play? Sound off on the Bard of Avon!
Posted by bookwormans at 8:05 AM