The Other British Bear 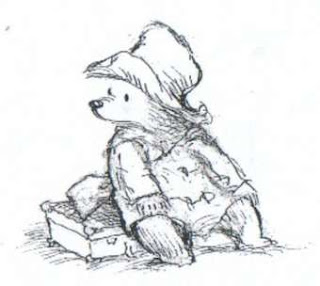 I've already mentioned the love that I have for a certain bear who goes by the name of Winnie-the-Pooh, but there is another bear from the British isles who has captured my heart as well. On Christmas Eve of 1956, English author Michael Bond was walking by a store near London's Paddington Station when he saw a lone teddy bear sitting on one of the shelves. Feeling sorry for the little toy, Bond bought the bear as a present for his wife. That gift soon inspired him to write a story about a little bear named Paddington and in ten days he had his very first book. A Bear Called Paddington was published in October of 1958 and it soon became a classic with children all over the world.
We first meet Paddington at the same place that Mr. & Mrs. Brown do; sitting on his suitcase in Paddington Station with a tag around his neck that reads "Please look after this bear. Thank you." You see, he just arrived as a stowaway from "Darkest Peru" where he had lived all of his life with Aunt Lucy, his only living relative. When Aunt Lucy goes to live in the Home for Retired Bears in Lima, she decides to send her nephew to England. So, armed with his bush hat and a suitcase full of marmalade sandwiches (his favorite treat), this little Peruvian bear hides himself in the lifeboat of a large ship and somehow finds his way to the big city of London. When Mr. & Mrs. Brown meet him, they instantly feel sorry for him and decide to ask him to come and live with them and their two children, Jonathan and Judy. So they take him home to 32 Windsor Gardens, Notting Hill, London where many adventures await him and everyone he meets.
My mom first introduced my sisters and I to these books (there are 13 of them so far) when I was a young teenager and it wasn't long before I fell in love with them. I have found Paddington to be a more modern and less whimsical type story than Winnie-the-Pooh. Whereas Pooh's world exists entirely in a secluded wood, Paddington's adventures happen all over England, making Paddington himself a much more "British" bear than Pooh (he lives in London, takes trips to the seaside, watches Blue Peter, eats TONS of marmalade and wears Wellington boots). This has perhaps made it somewhat harder for the stories to translate into other cultures, and he is still most popular in his native England where he has had his own TV show, his own line of merchandise, his own official website, and even a statue of himself in Paddinton Station. Still, Paddington has managed to collect millions of fans from all over the world including the US, Japan and South Africa.
I thoroughly enjoy reading about all of the crazy adventures this polite little bear manages to get himself into, and like most great children's literature, they are pleasant reading for people of all ages. So grab your Wellingtons, open up the marmalade, brush up on your "hard stare" and start having some adventures with Paddington Bear. You'll be glad that you did. 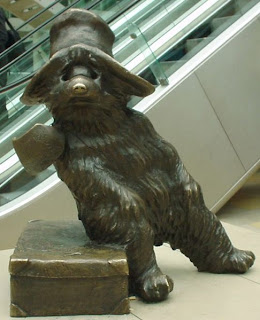