Over the weekend, news came that the literary world has lost two of its brightest stars. 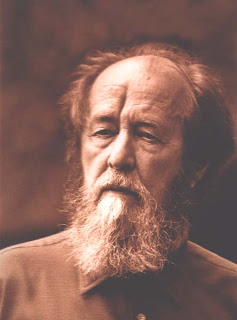 Winner of the Nobel Prize for Literature and creator of masterpieces like One Day in the Life of Ivan Denisovich and The Gulag Archipelago, Alexandr Solzhenitsyn brought the truth of Josef Stalin's brutal regime to light. In 1974, he was stripped of his Soviet citizenship and deported to the west. He lived in America until 1994 when he returned to Moscow with his wife. It was there that he died yesterday of heart failure at the age of 89.

Her art brought some of the literary world's best loved characters to life. Pauline Baynes is most famous for her beautiful illustrations of C. S. Lewis' The Chronicles of Narnia as well as many works by J. R. R. Tolkien. When asked about her fame as the drawer of Narnia (most people don't realize that she did anything else) she said "I think it's the fate of the illustrator. Look at Ernest Shepherd. He was so brilliant and did so much fine work, but people only associate him with Pooh and Piglet, and Toad of Toad Hall. It's the penalty of hitching your wagon to a star." She died within the past few days at the age of 85 at her home in Surrey.

Posted by bookwormans at 6:31 AM