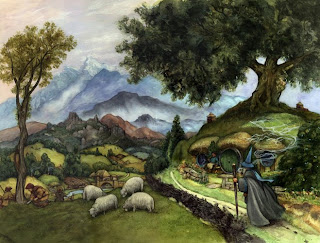 On the surface, there is nothing really special about the vast majority of people who walk this earth. We move through life without distinction, doing the same things day after day. We are ordinary, commonplace and everyday beings. Or are we? What if there were something noble and courageous inside of us just waiting to get out? What if we were capable of many mighty things and were only waiting for the right time to do them? That is a question that is answered for Bilbo Baggins, the hero of J. R. R. Tolkein's classic tale The Hobbit: or There and Back Again.

The Plot:
Ordinary hobbit Bilbo Baggins leads a quiet, simple life at his home in the Shire. Adventures, you see, are not something that hobbits have. They do not often deal with anyone from outside the Shire, and they very seldom, if ever go very far beyond their own borders, and Bilbo is no exception. Then one day, the appearance of Gandalf the wizard as well as band of dwarves on his doorstep turns his world upside-down.
The dwarves are trying to recapture their ancient homeland and its vast treasure from the evil dragon, Smaug, and they are in need of a "burglar". Gandalf believes that Bilbo is just the hobbit for the job. Bilbo's first instinct is to refuse, but suddenly, his romantic and adventurous side ("something Tookish") begins to awaken in him. Before he knows it, Bilbo is off on the adventure of his life. Along the way, he will find a courage and strength he never knew he had, and set in motion events that will echo throughout the ages of Middle-earth.
My Review (Caution- Spoilers!):
Though The Hobbit doesn't fit into one particular genre, it is very close to children's fantasy stories such as George MacDonald's classic The Princess and the Goblin. The writing is relatively simple, there is an omniscient narrator and the hero (Bilbo) is someone that children can relate to. In fact, this book itself is a lot like Bilbo. On the surface, it seems to be an ordinary children's story, but underneath there are many things that make this book great.
First, Tolkein is a genius of a writer. His attention to detail, his understanding of human character and his ability to create, not just a story, but a world itself, all make this a fascinating work for both children and adults.
Second, The Hobbit provides some of the back story for Tolkein's impressive Lord of the Rings. Though you can read LOTR without first reading this story, it does lay a foundation for many characters that will be given much more detail in the later books (such as Bilbo, Gandalf and Gollum).
Finally, The Hobbit serves as a bridge between the literature of childhood and the literature of adulthood. It especially helps to fill that ever-present gap between ages 9-13 that is sorely lacking in good literature that will help prepare them for the works of Dante and Shakespeare.

Perhaps it was Rayner Unwin who summed it up the best. As the ten year old son of publisher Sir Stanley Unwin, he was the first person to write up a review of The Hobbit in 1936. Here is what he had to say:

Bilbo Baggins was a Hobbit who lived in his Hobbit hole and never went for adventures, at last Gandalf the wizard and his Dwarves persuaded him to go. He had a very exciting time fighting goblins and wargs. At last they get to the lonely mountain; Smaug, the dragon who guards it is killed and after a terrific battle with the goblins he returned home — rich! This book, with the help of maps, does not need any illustrations it is good and should appeal to all children between the ages of 5 and 9.

Though I am no longer between the ages of 5 & 9, I thoroughly enjoyed this book, and at times I liked it better than the more in depth LOTR. I only regret that I didn't read it sooner. So if this is one of those books that you have been putting off, don't wait. Read it now!

There is a live-action version of The Hobbit currently in the works. Lord of the Rings director Peter Jackson is acting as producer with Guillermo del Toro directing. There is speculation on which actors will be reprising their roles from Lord of the Rings, but the names that are being tossed around include Ian McKellen (Gandalf), Ian Holm (Bilbo), Andy Serkis (Gollum) and Christopher Lee (Saruman). It is supposed to be divided into 2 parts to be released in December 2011 and December 2012.

There is also a 1977 animated version of the story starring Orson Bean, Cyril Ritchard, Hans Conried and John Huston. It has been simplified from the original story, but it does include many songs based on many of Tolkein's poems. It has been YEARS since I have seen it, so I can't give any real opinion of it.

Trivia: The Hobbit actors Cyril Ritchard and Hans Conried both starred as Captain Hook/Mr. Darling in Peter Pan; Ritchard in the Broadway version and Conried in the 1953 Disney Version.