The Complete (and Unabridged) Jane Austen: Pride and Prejudice 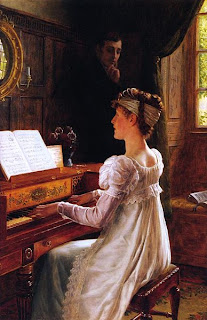 "There are few people whom I really love, and still fewer of whom I think well. The more I see of the world, the more am I dissatisfied with it; and everyday confirms my belief of the inconsistency of all human characters, and of the little dependence that can be placed on the appearance of either merit or sense."
Without a doubt, Pride and Prejudice is Austen's most popular and enduring work. Though it was first published almost 200 years ago, it's story and characters still resonate with 21st century readers and has spawned numerous screen and stage adaptations as well as various sequels and prequels. With good reason! It is probably Austen's most amusing and accessible story; her characters leap off the page and almost live and breathe before our very eyes. With her trademark wit and irony, Austen takes very ordinary people in very ordinary situations and makes them extraordinary.
The Plot:
Charming and witty Elizabeth is the second of the Bennett family's five daughters. Since their father's estate is entailed upon a distant cousin, Mrs. Bennett's goal in life is to see that her daughters marry well (rich). When eligible bachelor Charles Bingley settles near them, she is sure that he will marry one of the girls. His eye is immediately caught by the sweet and beautiful Jane, and they seem to be forming an attachment. Elizabeth is initially interested in Bingley's friend Mr. Darcy, but his haughty manners put her off. Her dislike for him increases when she is told of apparent wrongdoing towards the son of his father's steward, George Wickham. Bingley abruptly leaves the neighborhood and Jane goes to London brokenhearted.
Elizabeth meets Mr. Darcy again while visiting friends in Kent and it is there that she discovers that Mr. Darcy separated Bingley and Jane because her family was "unsuitable". When Darcy reveals his love for Elizabeth and proposes marriage, she stoutly refuses him citing his interference with Bingley and Jane as well as his injustice to Mr. Wickham. As the truth is slowly revealed and Darcy's true character comes to light, Elizabeth begins to see how wrong she was, and wonders if her chance at happiness is gone forever.
My Review (Caution-Spoilers):

Aah, those first impressions. In this novel, Austen reveals how unfortunate it is that we sometimes allow the first few seconds to determine our relationships with other people. This is exactly the mistake that both Elizabeth and Darcy make and it almost cost them their happiness.

"...to her he was only the man who made himself agreeable nowhere, and who had not thought her handsome enough to dance with."

"Mr. Darcy had at first scarcely allowed her to be pretty; he had looked at her without admiration at the ball; and when they next met, he looked at her only to criticise."

Elizabeth especially has a hard time seeing past her early prejudices when judging people. Her abhorrence of Mr. Darcy stems mainly from his insult upon their first meeting, while her good opinion of Wickham is due almost entirely to his agreeable manners. She soon discovers that her prejudices blinded her both to Mr. Darcy's real goodness as well as Wickham's true colors. It is only once she is at Pemberly, hearing Darcy praised by those who knew him best, that Elizabeth realizes her mistake.

"There was certainly at this moment, in Elizabeth's mind, a more gentle sensation towards the original than she had ever felt in the height of their acquaintance. The commendation bestowed on him by Mrs. Reynolds was of no trifling nature. What praise is more valuable than the praise of an intelligent servant? As a brother, a landlord, a master, she considered how many people's happiness were in his guardianship! -- How much of pleasure or pain it was in his power to bestow! -- How much of good or evil must be done by him! Every idea that had been brought forward by the housekeeper was favourable to his character, and as she stood before the canvas, on which he was represented, and fixed his eyes upon herself, she thought of his regard with a deeper sentiment of gratitude than it had ever raised before; she remembered its warmth, and softened its impropriety of expression."

There is also a great irony being played out throughout the entire novel. As with Persuasion, Austen attacks the idea that rank determines good breeding. The main reason that Darcy gives for breaking up Jane and Bingley is the behavior of the majority of the Bennet family.

"The situation of your mother's family, though objectionable, was nothing in comparison of that total want of propriety so frequently, so almost uniformly, betrayed by herself, by your three younger sisters, and occasionally even by your father."

Funny thing is, Darcy and Bingley's relatives aren't all that classy either. Bingley's sisters are extremely rude and his brother-in-law indolent and dull. Darcy's aunt, Lady Catherine De Bourgh, is self-absorbed, vain and demanding. Just as Mrs. Bennett is constantly saying things that betray her absurdity, so is Lady Catherine.

"There are few people in England, I suppose, who have more true enjoyment of music than myself, or a better natural taste. If I had ever learnt, I should have been a great proficient."

"...and though Mrs. Collins has no instrument, she is very welcome, as I have often told her, to come to Rosings every day, and play on the piano forte in Mrs. Jenkinson's room. She would be in nobody's way, you know, in that part of the house.''

As I said in my introduction, it is truly the characters that, in my opinion, really distinguish Pride and Prejudice from Austens other works. They are so complete, their actions so believable, and their dialogue so revealing, that they can sometimes seem more real than the characters in the other works. It is also a fine example of Austen's writing style at its best, combining the sharp wit of Northanger Abbey with the subtle ironies of Emma. It well deserves its place near the top of many reader's lists (including mine). I can't say enough about it. If you never read any other Austen novel, you must read this one. I'll leave you with a quote from Sir Walter Scott's private journal on his opinion of this novel.

"Also read again and for the third time at least Miss Austen's very finely written novel of Pride and Prejudice. That young lady had a talent for describing the involvement and feelings and characters of ordinary life which is to me the most wonderful I ever met with. The Big Bow-wow strain I can do myself like any now going, but the exquisite touch which renders ordinary commonplace things and characters interesting from the truth of the description and the sentiment is denied to me. What a pity such a gifted creature died so early!"

First, there is the 1940 adaptation starring Greer Garson and Laurence Olivier. I've never seen it, but I do know that the time period was pushed forward to allow for more flamboyant dresses. Not sure how I feel about that.

Then there is the 1980 adaptation starring Elizabeth Garvie and David Rintoul. I haven't seen this one either, but I would imagine it to be like the other Austen adaptations of the period.

Finally, there are the 1995 and 2005 adaptations starring Jennifer Ehle/Colin Firth and Keira Knightly/Matthew Macfadyen respectively. They are both wonderful in their own way. For my review of them, see here.

Posted by bookwormans at 6:47 AM

As far as the 1985 movie of Pride and Prejudice, my dad likened it to a stage play. The technical aspects were not the best ever; but if you can get past that, it was an enjoyable viewing.

Loved both the 95 and 05 adaptations on film. My daughter and I went ga-ga for Jane Austen last year and saw as much as we could as well as reading the books...it was delightful sharing them with her!

Personally, I like the 95 version better. The 05 one just wasn't long enough, and the dialogue wasn't like the book enough. However, having said thus, I, like a true Jane Austen addict, own both adaptations. I just view them as slightly different stories. All is all, 95 rules!
Kathleen