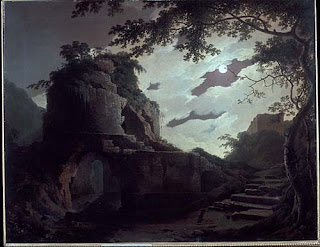 "Perhaps after all it is possible to read too many novels."

Growing up isn't easy. Imagination is replaced by reality, trust must be tempered by discernment, and innocence is lost no matter how hard we try to keep it. This is what the heroine of Jane Austen's first completed novel, Northanger Abbey, faces as she forever leaves childhood behind to enter a world that she has only seen glimpses of and discover that it is a far different world from what she had imagined it to be.
The Plot:
Catherine Morland is a sweet, ordinary and rather naive 17 year-old girl who loves reading Gothic novels. When she is invited by family friends to spend a few weeks with them in Bath, she immediately accepts.
Once in Bath, she meets two very different families. The first is Isabella Thorpe and her boorish brother John (who attends school with Catherine's brother James). Isabella immediately latches on to Catherine, encouraging her passion for Gothic novels and pushing her towards a relationship with John. The second is an intriguing young man by the name of Henry Tilney whom, along with his sister Eleanor, Catherine soon develops a strong attachment to.
The Tilney's, along with their father General Tilney, invite Catherine to stay with them for a few weeks at their home, Northanger Abbey. With Henry's encouragement (teasing), Catherine soon begins to see the visit through the eyes of her novels, with herself as the heroine. As her stay continues, she begins to uncover more and more mysterious circumstances surrounding the inhabitants of Northanger, especially concerning the death of Mrs. Tilney. Once the truth is discovered, Catherine's life and her attitude towards it will be forever altered.
My Review (Caution:Spoilers)
Of all of Austen's novel, this is the one that has its tongue most firmly in its cheek. From the very opening pages, Austen sets the sarcastic, lighthearted tone that the rest of the novel will take.

"She had reached the age of seventeen, without having seen one amiable youth who could call forth her sensibility, without having inspired one real passion, and without having excited even any admiration but what was very moderate and very transient. This was strange indeed! But strange things may be generally accounted for if their cause be fairly searched out. There was not one lord in the neighbourhood; no--not even a baronet. There was not one family among their acquaintance who had reared and supported a boy accidentally found at their door--not one young man whose origin was unknown. Her father had no ward, and the squire of the parish no children. But when a young lady is to be a heroine, the perverseness of forty surrounding families cannot prevent her. Something must and will happen to throw a hero in her way."

It is clear from the beginning that Austen does not want us to take our heroine (or rather our want-to-be-heroine) seriously. Indeed, Catherine is almost the embodiment of the popular Gothic novels that Austen is satirizing; passionate and sincere, but wholly lacking a connection with reality. It is this tone that can make or break Northanger Abbey for readers. Some readers will be delighted with this sarcastic look at Gothic novels, while others might miss the intimate connection with the characters that a more subtle tone would have provided. And because this story was published after Austen's death, she was never able to give it the polish that her other works had, thus creating the biggest difference between this and her later works.
This story tends to rank either at the top or at the bottom of most lists and, ultimately, it will depend on what you as the reader prefer. For me, though I enjoyed the story (even if it is somewhat slow-moving), I must say that I prefer the sparkling wit of Pride and Prejudice and Emma to the scathing sarcasm of Northanger Abbey. Though it is funny and even charming at times, it often lacks the subtlety of the later works. A good story, but not exactly my favorite.
There is, however, one part of Northanger Abbey that we, as readers, should all be very grateful for. That, of course, is Austen's famous "Defense of the novel". Austen was one of the first writers to make the novel accepted as a high literary art and not sub-par reading. It is through this we see that Austen is not attacking all novels in her story, but simply the sensational novels of her time and the desire of readers to translate the stories to real life. Just as we would not throw out our Dickens simply because it is a novel like a Harlequin Romance, Austen pleas for her contemporaries to not degrade the novel because there were some bad ones out there. Because it is such an important part of not only Northanger Abbey, but also of literary history, I think it deserves a spot in this review.

"Yes, novels; -- for I will not adopt that ungenerous and impolitic custom so common with novel-writers, of degrading by their contemptuous censure the very performances, to the number of which they are themselves adding -- joining with their greatest enemies in bestowing the harshest epithets on such works, and scarcely ever permitting them to be read by their own heroine, who, if she accidentally take up a novel, is sure to turn over its insipid pages with disgust. Alas! if the heroine of one novel be not patronized by the heroine of another, from whom can she expect protection and regard? I cannot approve of it. Let us leave it to the Reviewers to abuse such effusions of fancy at their leisure, and over every new novel to talk in threadbare strains of the trash with which the press now groans. Let us not desert one another; we are an injured body. Although our productions have afforded more extensive and unaffected pleasure than those of any other literary corporation in the world, no species of composition has been so much decried. From pride, ignorance, or fashion, our foes are almost as many as our readers. And while the abilities of the nine-hundredth abridger of the History of England, or of the man who collects and publishes in a volume some dozen lines of Milton, Pope, and Prior, with a paper from the Spectator, and a chapter from Sterne, are eulogized by a thousand pens, -- there seems almost a general wish of decrying the capacity and undervaluing the labour of the novelist, and of lighting the performances which have only genius, wit, and taste to recommend them. "I am no novel-reader -- I seldom look into novels -- Do not imagine that I often read novels -- It is really very well for a novel." -- Such is the common cant. -- "And what are you reading, Miss ----------?" "Oh! it is only a novel!" replies the young lady; while she lays down her book with affected indifference, or momentary shame. -- "It is only Cecilia, or Camilla, or Belinda;" or, in short, only some work in which the greatest powers of the mind are displayed, in which the most thorough knowledge of human nature, the happiest delineation of its varieties, the liveliest effusions of wit and humour, are conveyed to the world in the best-chosen language. Now, had the same young lady been engaged with a volume of the Spectator, instead of such a work, how proudly would she have produced the book, and told its name; though the chances must be against her being occupied by any part of that voluminous publication, of which either the matter or manner would not disgust a young person of taste: the substance of its papers so often consisting in the statement of improbable circumstances, unnatural characters, and topics of conversation which no longer concern anyone living; and their language, too, frequently so coarse as to give no very favourable idea of the age that could endure it."

The Movie:
Northanger Abbey is a rarity among the Austen novels because it has only been adapted for the screen twice.
The first was in 1986, starring Katherine Schlesinger as Catherine and Peter Firth as Henry Tilney. I haven't seen it, so I can't give you my opinion, but the reviews on Amazon.com aren't exactly the best that I have ever seen.
Then of course there was the recent Masterpiece adaptation starring Felicity Jones as Catherine and JJ Field as Henry Tilney. I'm not going to add much to my original review other than to say that it is a bit, um, spicier than most of the other Austen adaptations, which should come as no surprise in today's culture. Nevertheless, there are a few scenes where a remote would be handy.
Posted by bookwormans at 9:44 AM

Having seen the 1986 adaptation of Northanger Abbey, I would strongly advise any Austen fans against watching it! Peter Firth may not be as old as he looks, but he appears to be about 15 years older than Catherine Morland; and Mr. Tilney is supposed to be only about 8 years older. That's not the only problem with it, but it would not be worth your time to watch.
That being said, I thoroughly enjoyed the book--perhaps one reason I didn't like the 1986 movie. =)

I liked the masterpiece theatre version. I had never read the book, and having seen the movie, I don't feel I really need to after having read the review. And yes, a remote would come in handy certain times; just another example of how our world doesn't really keep things like that underwraps as maybe they should.