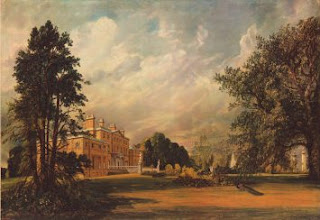 "We have all a better guide in ourselves, if we would attend to it, than any other person can be."
In her fourth complete novel, Jane Austen puts into practice the idea that she began exploring in her first novel; that is the idea that novels are not simply for sensation and entertainment, but may also be used for moral instruction as well as expanding the minds of their readers.
Mansfield Park, perhaps Austen's most complex and controversial novel, takes a hard look at a society whose values and morals are quickly changing, and at the consequences facing those who either change with it or stand firm in their principles.
The Plot:
Taken from her relatively poor family at a young age, Fanny Price is sent to live with her Uncle and Aunt Bertram, their four children (Tom, Edmund, Maria and Julia) and her horrid Aunt Norris at Mansfield Park. Shy, sensitive and homesick, Fanny is almost constantly tormented by everyone in the family except Edmund. As time passes and Fanny grows, she and Edmund become very close, with Edmund helping to shape her character and serve as her protector.
Romance seems very likely until the arrival of the siblings Henry and Mary Crawford. The Crawfords are very fashionable, having lived most of their lives in London, and Edmund is especially attracted to the witty and charming Mary, while Henry is playing with the affections of both Maria (who is already engaged) and Julia. Fanny grows increasingly concerned for Edmund as he moves further and further from the firm principles that he once had, and when Henry turns his eyes towards her, she is faced with a decision that will test her own faith and indirectly cause a scandal that will rock the Mansfield family to its core.
My Review (Caution-Spoilers):
As I've already said, Mansfield Park is probably Austen's most controversial work. Whether you like this novel or not often comes down to your perception of the heroine, Fanny. It is usually because of her that many Austen readers rank this as their least favorite novel. But understanding Fanny requires that we not read this story through the eyes of today's culture or with our own personality in mind.
First off, Fanny's entire character and disposition are different from every other Austen heroine. She is extremely shy, sensitive and almost sickly and often serves as a shadow in the book. All told, she is almost the complete opposite of more popular heroines like Elizabeth Bennett and Emma Woodhouse. Fanny also lacks much of the self-confidence of the other Austen women. She has had it drilled into her (mostly Mrs. Norris) that she is below everyone else in the family. This, along with her natural shyness, makes Fanny extremely modest. Today's readers often look on all of this and see Fanny as somewhat of a wet dishrag, but Fanny's real strength lies within. Her morals and principles are very strong and she never lets go of them, even when it causes others to ridicule and torment her. This is especially seen when Fanny refuses to join in the play led by Tom and Mrs. Norris says "...I shall think her a very obstinate, ungrateful girl, if she does not do what her aunt and cousins wish her-- very ungrateful, indeed, considering who and what she is." Though this pains the modest Fanny, she never considers giving in.
Unfortunately, many readers see this strength of morals as mere priggishness. What is so funny about this kind of thinking is that it is completely backwards from what Austen's intentions are. Let's take the Crawfords as an example. They are both intelligent, good looking, charming and witty and many readers feel a great liking towards them. There is, however, one major thing that they both lack, something that no real Austen hero or heroine does: principle. They both do what feels good, no matter who it might hurt. This is especially obvious with Henry who not only hurts Fanny by giving her unwanted attention, but also both of the Bertram girls through his shameless flirtations. This is the one reason that Fanny could never bring herself to accept or respect him. "I cannot think well of a man who sports with any woman's feelings; and there may often be a great deal more suffered than a stander-by can judge of." Modern readers are also prone to laugh at Fanny's refusing to take part in the play. This is a mistake because at the time, acting in plays, especially one like Lover's Vows, was not something that decent people did. Austen is simply using the play as another example of the Crawford's lack of principles as well as Fanny's strong convictions.
Jane Austen's society was on the cusp of change. It was moving away from long held principles and convictions (represented by Fanny and Mansfield Park) towards a more care-free lifestyle (represented by London and the Crawfords). Though it is not exactly the most romantic or even the most engaging of her novels, its message of deep conviction is relevant even today and its heroine is one that we could all learn something from. I think that this quote regarding Sir Bertram's regrets for his children sums up Austen's intentions very nicely.

"Here had been grievous mismanagement; but, bad as it was, he gradually grew to feel that it had not been the most direful mistake in his plan of education. something must have been wanting within, or time would have worn away much of its ill effect. He feared that principle, active principle, had been wanting; that they had never been properly taught to govern their inclinations and tempers by that sense of duty which can alone suffice. They had been instructed theoretically in their religion, but never required to bring it into daily practice. To be distinguished for elegance and accomplishments, the authorised object of their youth, could have had no useful influence that way, no moral effect on the mind. He had meant them to be good, but his cares had been directed to the understanding and manners, not the disposition; and of the necessity of self-denial and humility, he feared they had never heard from any lips that could profit them."

The Movie:
Poor Mansfield Park! There are really just no good adaptations of this novel.
There's the 1983 version. Haven't seen it, but I would guess that you would have to have a thing for 1980s British TV adaptations. They often lack the eye-pleasing quality of recent adaptations.
Then there's the 1999 movie version, which I've also never seen. Most critics say that it is a well-made movie, but basically re-written for modern audiences with a feisty, independent Fanny and the addition of slave-trade controversy.
And, finally, there's the recent Masterpiece adaptation. I stand by most of my review, especially concerning Blake Ritson as Edmund, but as a whole, this adaptation basically butchered the story. It works if you haven't read the book (which I hadn't at the time), but it's not worth your time if you have. Basically, don't bother to watch it.
Posted by bookwormans at 7:30 AM

Excellent, excellent review! I like how you defended Fanny's character. It seems that some people read Pride and Prejudice and think that all of Austen's heroines should be like Elizabeth Bennet--but if all of them were E. Bennet, there would be almost no variety in her novels. Further, it seemed as though the makers of the recent Masterpiece adaptation tried to make Fanny like Elizabeth--only worse. =(