The Complete (and Unabridged) Jane Austen: Sense and Sensibility 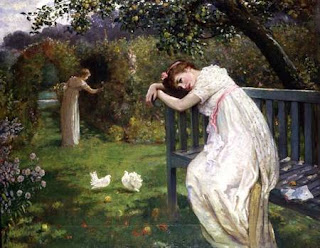 "Marianne Dashwood was born to an extraordinary fate. She was born to discover the falsehood of her own opinions, and to counteract by her conduct her most favorite maxims. She was born to overcome an affection formed so late in life as at seventeen, and with no sentiment superior to strong esteem and lively friendship, voluntarily to give her hand to another--and that other, a man who had suffered no less than herself under the event of a former attachment, whom, two years before, she had considered too old to be married, and who still sought the constitutional safeguard of a flannel waistcoat!"

In the end, we can see that Marianne didn't settle for second best, just as Elizabeth Bennett didn't "settle" for Mr. Darcy just because Mr. Whickham had more pleasing manners. In all of her novels, Jane Austen stresses the importance of character when judging a person, not their rank, wealth or manners. And we all know that when it comes to character, Col. Brandon has it in spades!
The Movie:
There are 2 older versions of Sense and Sensibility, one done in 1971 and one done in 1981. I haven't seen either of these adaptations, so I have no opinion to give.
Then we have the absolutely wonderful 1995 version starring Emma Thompson, Kate Winslet, Greg Wise, Hugh Grant and the great Alan Rickman. Though there are a few problems with this adaptation (mainly Thompson's age when playing Elinor), it is still one of the best Austen adaptations out there. A definite must see!!
And then we have the recent Masterpiece adaptation starring Hattie Morihan and Charity Wakefield. Though it doesn't quite knock the '95 version off the top, it is still a very good adaptation (even if Andrew Davies did steal a few things from Thompson's version). See my review here.
Posted by bookwormans at 6:26 AM