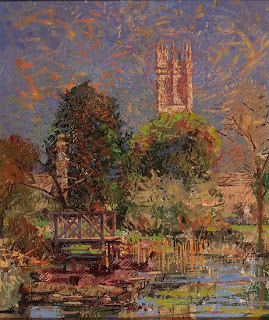 For those of you who don't know, I am a big fan of C. S. Lewis. He is my absolute most favorite Christian author and many of his writings from The Chronicles of Narnia to The Four Loves to 'Til We Have Faces continue to haunt me and provoke my thinking. For Christmas this year, I received Humphrey Carpenter's 1978 biography entitled The Inklings: C. S. Lewis, J. R. R. Tolkein, Charles Williams, and Their Friends. This is the first biography that I have read in a while, and it is really a fascinating glimpse into the lives if some of the 20th century's most amazing authors.
Carpenter's biography is about the group itself, though it does lean particularly heavily on Lewis and Williams. I was somewhat disappointed that there was not a whole lot of personal information regarding Tolkein, but Carpenter is also the author of a biography strictly on Tolkein, so he leaves it to the reader to search there for more info. But as I said, this novel is not solely about any one writer, but about everyone in that group, and (more importantly) how they influenced each other.
The Inklings were basically a very informal group of writers/professors who met at Oxford from about 1930 to about 1949. Groups and clubs were not a new thing to the University, in fact, they were a very integral part of Oxford society and the Inklings were a very relaxed group compared to most. We probably would not really know anything about them if they hadn't been a weekly gathering of some of literature's most famous works hadn't come out of it.
Throughout the book, Carpenter weaves a tale of a group of men whose friendships would challenge them, provoke them, bind them, and (in the case of Lewis) save them. There are so many wonderful aspects of this book that really caught my eye and my imagination. Like how one of the earliest clubs the Lewis and Tolkein joined (known as the "Coal Biters") gathered weekly to translate Icelandic sagas into English. Or how Warnie Lewis (C. S.'s brother) was an admired writer in his own right. Or how the various infighting in the English department of Oxford constantly changed what the students were learning. Or how the Inklings would frequently change meeting places during the war due to beer shortage. And one can just imagine the worlds of Narnia and Middle Earth coming to life in Lewis' rooms in Magdalen College.
There is a quote of Lewis' found in this book that sums everything up perfectly. "Oh for the people who speak one's own language". Ultimately, the story of the Inklings is the story of a group of people who found lasting friendship in their common love for literature, for myths, and for history. If you have ever wanted to learn more about the creators of Narnia and The Lord of the Rings, then Carpenter's biography is for you. From the casual reader to the Inklings enthusiast, it has something to offer everyone.
Picture Credit: Magdalen Tower from the Botanical Gardens by Francis Hamel
Posted by bookwormans at 3:37 PM