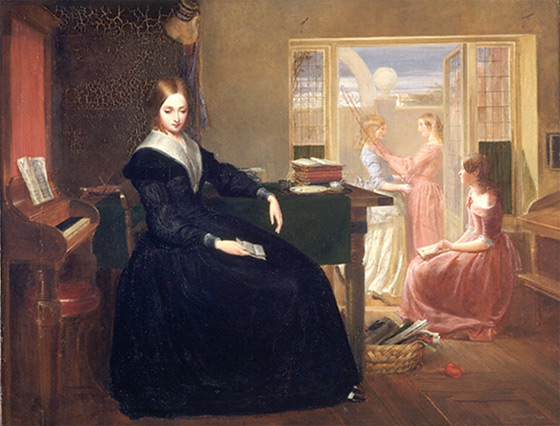 All true histories contain instruction; though, in some, the treasure may be hard to find, and when found, so trivial in quantity, that the dry, shriveled kernel scarcely compensates for the trouble of cracking the nut.
A Bronte novel for fall has become a bit of a tradition for me over the past few years. There is nothing like curling up on a crisp autumn day with a delicious Bronte story. This year, I read the first novel of the lesser known sister, Anne. Though there are many similarities with the works of Charlotte, Anne's writing has a unique strength that gives her an equal voice in what might be literature's greatest sisterhood.

Agnes Grey is the young daughter of a country parson. After her family falls into financial hardship, Agnes is determined to earn her own keep. She decides to join the only respectable profession there is for a young woman in her time: being a governess. She sets off with stars in her eyes and dreams of the precious children who's minds she will help shape and grow.

Reality sets in quickly when she arrives at her first position. The children are wild, the parents are uncooperative, and Agnes finds herself in a terrible limbo, neither a member of the family nor a servant. As Agnes becomes more involved with the children of the upper class, she catches a glimpse of a world that both fascinates and repels her, and meets a man whose simplicity and earnestness captures her heart.

I love the Brontes, but that is old news. Though Charlotte is my favorite, I can't help but like Anne's works as well. I really enjoyed The Tenant of Wildfell Hall, and Agnes Grey is an equally inviting read.

If you are familiar with Charlotte's works, you will notice many recurring themes between them and Agnes Grey. There is, of course, the plight of governesses that permeates most Bronte works. This novel is a pretty accurate description of what life was like for Victorian governesses. They were considered beneath their employers and were often subjected to cruel and embarrassing treatment. Agnes experiences many painful moments in both homes she works in, and is often forced to stand up against the cruel treatment dished out by the upper-class. The other similarity is found in the relationship between Agnes and Ms. Murray, which mirrors that of Lucy Snowe and Ms. Fanshawe in Charlotte's Villette. like Lucy Snowe, Agnes becomes a bit of a confidant (if not a true friend) of the flighty and coquettish young charge who is determined to secure the heart of the local landowner, and break a few hearts in the process.

But though there are many similarities between Agnes Grey and other Bronte works, it is still a gem of a story in it's own right. Anne's writing has a certain strength of character that shines through in both of her novels. Her stories are written to teach lessons, and unlike her sisters, she puts hers out there in plain sight. Anne is determined to teach people how to empathize with others, how to show kindness, and not cruelty, to those beneath them, and how to appreciate intellectual and moral beauty over physical attractions. This tone is evident in both this novel and The Tenant of Wildfell Hall. Though she can sound somewhat preachy at times (she is a preacher's daughter after all), her lessons are admirable and necessary.

So, how does this novel stack up to the other Brontes? Well, it has its good points and not so good points. It is shorter than any other Bronte novel I've read, and the prose is strong, yet flowing. Plus, it has the most unambiguous happy ending of any other Bronte novel I've read. That being said, Anne's lessons tend to trip up her characters and her story. Since Agnes is the moral compass of the story, she is never really allowed to grow and mature. She starts out good and she ends up good, end of story. Plus, Mr. Weston (her love interest) is probably one of the most boring Bronte guys out there. No passion like Mr. Rochester, no evil like Heathcliffe, heck even Gilbert Markham is more interesting. Sweet guy? Yes, but very plain.

Though it lacks the maturity of her second novel and the subtlety of her sister's, there is no doubt that Anne deserves to be recognized as a wonderful Victorian writer. In many ways, this novel reminds me quite a bit of Jane Austen (esp. Mansfield Park). A must read, and a great intro to the Bronte novels.
Posted by bookwormans at 12:30 AM