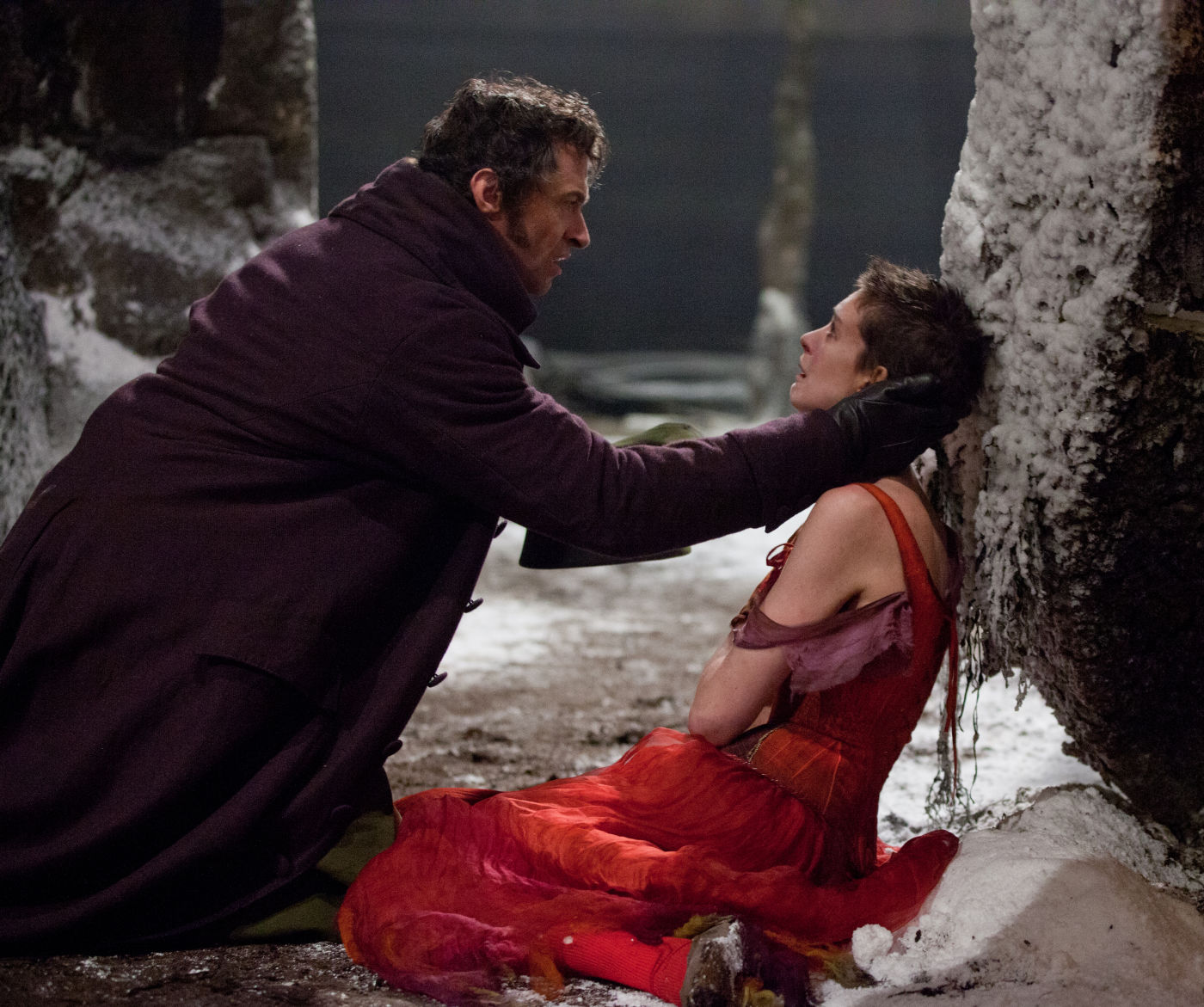 It is one of the most beloved musicals of all time, and in 2012 The King's Speech director Tom Hooper brought it to the silver screen.  Based on Victor Hugo's classic novel of the plight of the poor in 19th century France, the film stars Hugh Jackman, Anne Hathaway, Russell Crowe, Amanda Seyfried, Eddie Redmayne, and a host of others.  Though I had read the book and was familiar with the story, I had not seen the musical before.  Here are my thoughts on the film:

-I saw this film with a friend who had seen the musical multiple times and owned the soundtrack.  Like many other reviews I have read, she said that the film version lacked the overall grandness and majesty of the stage.  I attribute this to the fact that the stage and the cinema are different mediums with different effects.  On stage, most people won't be able to really see the actors, so they must convey the emotions of the story almost completely through their voices.  We are allowed greater intimacy through the screen, and so the actors can convey emotion with simply a look or an action.  Rather than being the main vehicle for the story as it is on the stage, the music was simply one of many aspects to touch the viewer in the film.

-Hooper's decision to not pre-record the music for the film was certainly a bold move.  Sometimes it works great (Jackman, Hathaway, Redmayne, Samantha Barks) and the raw emotion in the actor's voices move us deeply.  And then there are some who could have really benefited from pre-recording.  One person in particular was Russell Crowe as Javert.  You could tell that it took all of his concentration to simply hit his notes (which he didn't always do).  This caused him to not really be able to act his character out, and unlike with Jackman or Hathaway, he could never really convey the emotion behind Javert.

-The sets and costumes are good most of the time, though there was a sense of claustrophobia in some of the scenes.  There were also some scenes that had overly computerized backgrounds that took away some of the feeling.

-In my opinion, Anne Hathaway deserves an Oscar simply for her "I Dreamed a Dream" scene.  It is so powerful and the emotion so raw that you can't help but be moved to tears.

-Obviously there is no way to get every aspect of a Victor Hugo novel onto the screen, but the main bones of the story are there and flow together very well.

Though this film isn't perfect, it is still wonderful in many ways.  I defy anyone to watch this film and not tear up at either Hathaway's main scene or the grand finale on the barricade.  Hugo's story of the power of love and forgiveness is one of the most beautiful stories out there, and this film is a magnificent tribute to it.  If you haven't seen it, then do so.  If you have, go see it again.  It is very likely that this film, like its stage counterpart, will be popular for many years to come.
Posted by bookwormans at 12:30 AM

Victor Hugo's novel is quite possibly my favourite book ever and the stage musical is *definitely* my favourite musical ever. I had massively high expectations going into this movie - and it lived up to those expectations. It's now my favourite movie ever! Is it 100% perfect? No. Hugh Jackman's "Bring Him Home" is underwhelming, Russell Crowe is only competent as Javert, and I was saddened by some of the cuts. I did miss Thenardiers' solo "Dog Eat Dog" and the lack of Enjolras/Grantaire interaction. But everything else about the film is wonderful. The acting in this film is fantastic. The singing isn't as belty and powerful as you'd get in the stage version but it's still brilliant for a movie musical and FAR better than the standard of singing in the "Phantom of the Opera" and "Sweeney Todd" films. The live singing definitely worked in the film's favour. The more emotional songs - like "I Dreamed a Dream", "Empty Chairs at Empty Tables", and "On My Own" - wouldn't have been anywhere near as moving if the actors had simply recorded their vocals in a studio. And the film is a brilliant tribute to the book and the stage version. The stage version is a very faithful adaptation of the book anyway but I loved that they added in some extra details from the book like the convent scene and Marius's grandfather. And I love that a lot of big West End stars made cameos in this film. As you can probably tell I'm a huge fan : )