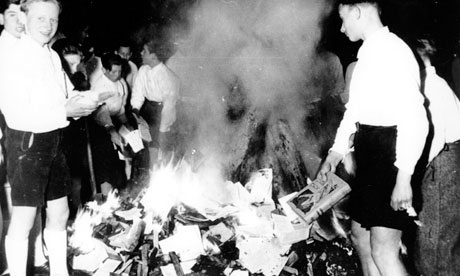 “I have hated words and I have loved them, and I hope I have made them right.”

Published in 2005, Australian writer Marcus Zusak's fifth novel quickly rose on the NY Times Best Seller List and would go on to win numerous awards.  Zusak says that the inspiration for the story's setting of Nazi Germany came from the stories his parents told of growing up in Germany and Austria during that period.  In this novel, we see the complications and dangers of war played out in the lives of young people and the power that words have, both for good and for evil.

The story is narrated by Death and set in Nazi Germany, a time and place that is keeping him very busy.  He first encounters Liesel Meminger ("The Book Thief") when her little brother dies on their way to a new foster family.  Liesel arrives alone at the house of Hans and Rosa Hubermann.  Though Rosa is hot-tempered and abrasive towards Liesel, Hans immediately takes to her and begins teaching her to read.  Liesel settles into life on Himmel St. and becomes friends with a neighbor boy named Rudy Steiner.  At a Nazi book-burning ceremony, Liesel (who is now obsessed with reading) secretly takes a book that survived the fire and brings it home.  Her book stealing days really begin there.

Life changes dramatically when Max Vandenburg, a Jew, arrives at their house and Hans and Rosa hide him in the basement.  He and Liesel soon bond over their love of books and their shared anxieties.  But as the war rages on, life on Himmel St. becomes more and more dangerous.  Bombings, rationing, and the ever present threat of the Nazis discovering Max.

This book has garnered lots of praise and buzz ever since it came out.  It certainly seems to have affected many people and it has earned rave reviews from many readers.  With the recently released film version, I figured it was time to give this one a try.

One of the most interesting aspects of this novel is its setting on the German side of World War II.  While Zusak is quick to emphasize the real horror and tragedy that the Jewish people went through, he also recognizes that they are not the only victims.  We tend to look back on that period and lump all Germans under the "Nazi" label.  What we often don't realize is that many Germans were victims as well.  They were young people who had no say in what happened to their nation and what they were instructed believe.  They were men and women who were forced to accept (at least on the surface) things they did not really believe in order to protect their families.  They were people who didn't ask for war, and yet lost their lives in bombings.  By the end of the novel, we feel the pain of loss of many characters and realize that war makes victims of us all.

But this isn't just a novel about war, it is also about words.  As readers, we know that words are powerful and can change the world.  What we perhaps fail to realize is that it is the reader/speaker that determines how that power is used.  Max often ponders how Hitler is able to use the power of words to drill horrible beliefs into the German people, and yet ironically his path to safety is hidden in the pages of Mein Kampf.  To me, this is why book burning and book censorship is so crazy.  The mere existence of words does not threaten people, but rather what we choose to do with them.  Wise words have often been twisted by people to use for their own evil purposes.  And sometimes, words meant to bring pain have been used to bring about good.  It is us who determine what their ultimate fate will be.  Perhaps the most powerful moment in the book regarding this is when Liesel is reading the book she saved from the fire to her neighbors in the bomb shelter.  A book that the Nazis tried to burn for fear that it would make their citizens weak actually serves to bring them comfort and make them strong even as their world is crumbling around them.

Now, as far as The Book Thief itself, I didn't particuarly have strong feelings about it one way or another.   I certainly didn't hate it and found many interesting aspects to the story, but it was by no means a "life-changing" one.  I kind of feel like I might have connected more if Liesel herself had been the narrator.  The use of Death as a narrator, though interesting, made for a lack of intimacy and in some ways sympathy that are necessary to really pull a story like this off.  I'm glad I read it, but it isn't one that I see myself reading over and over again in the coming years.

Though it is by no means a perfect book, I still don't mind recommending it.  It has some good messages, and it has certainly struck a chord with many readers.  If it sounds like something that would interest you, go for it.  It is worth reading at least once.

The book was recently adapted into a major motion picture starring Geoffrey Rush, Emily Watson, and Sophie Nelisse.  It has received mixed reviews, but I have not yet seen it and so cannot comment.  Please let us know your impression of it if you have seen it.
Posted by bookwormans at 9:39 AM

Hi, I came via Hope in Brazil. I thought the book was so so, at the time - I read it a number of years ago - but I really enjoyed the film.
Noticed one of your top 10 books is Madame Bovary. I've had that in mind to read for a long time & hope to get onto it soon.