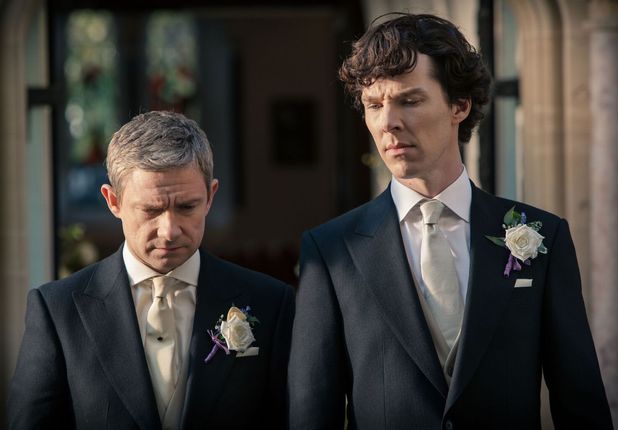 There is perhaps no other fandom that is forced to wait like those of us who love Sherlock.  Two years after we watched Sherlock Holmes (Benedict Cumberbatch) supposedly jump to his death only to mysteriously appear alive at the end of the series.  Now, the world's favorite consulting detective is back and ready to pick up where he left off.  But what happens when he discovers that other people's lives don't stop when he is not around?

I absolutely love this series and have spent the last two years dying for more.  Just when you think that the show can't get any better, creators Mark Gatiss and Stephen Moffat go above and beyond to bring us edge of your seat, mind-blowing television.  The original cast members reprise their roles and are once again stellar.  Plus, we see the addition of Amanda Abbington as Mary Morstan (John Watson's fiance/wife).  In this series, we seem to focus more on the characters and less on the crimes themselves (though they are very good).  I think it was especially interesting to see Sherlock having to face the changes that have happened during his absence and to find himself no longer the very center of his friends' lives.  Watson is also going through some rough changes.  In a way, he is struggling to adjust to married life after the highs of living at Baker Street much as he was to civilian life after the war.  In the end, they once again discover that they still need each other and that they work best as a team.

All three episodes from this series were spectacular, but I especially loved the first one.  In many ways, it seemed to be one long love letter to the fans.  It gave a nod to the thousands of theories on Sherlock's survival.  It touched on the (often absurd) fanfiction you can find online.  And it hearkened back to many jokes and moments from the earliest episodes.  And you simply haven't lived until you have seen Sherlock and John play parlor games after a night of drinking (episode 2).  So many times, I found my jaw dropping in awe of where Gatiss and Moffat have taken both the characters and the story.  And it simply wouldn't be a Sherlock series without some amazing quotes:

-Watson: "I don’t shave for Sherlock Holmes."
Mary: "You should put that on a tshirt."

-David: "...They’re right about you. You’re a bloody psychopath."
Sherlock: "High-functioning sociopath. With your number."

-Sherlock: "John, there's something I should say, I've meant to say always and I never have. Since it's unlikely we'll ever meet again, I might as well say it now.  Sherlock is actually a girl's name."

I am more in love with series than ever before.  I highly recommend it to anyone.  And now...we wait for Series 4.

Did you miss me?
Posted by bookwormans at 11:14 AM

I just want to say that I agree with everything you said :)