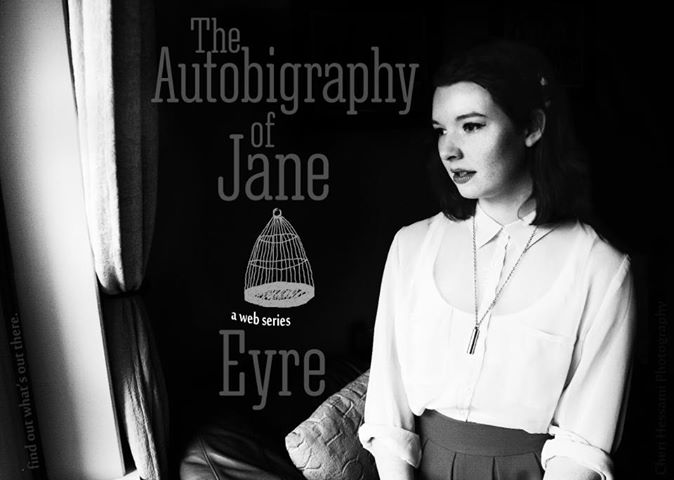 It's no secret that last year's hugely popular The Lizzie Bennet Diaries completely turned the internet/literary world upside down  Creators Hank Green and Bernie Su took a widely known and well-loved story and recreated it a way that fit perfectly within our modern times.  And the new series Emma Approved is proving to be just as popular, showing that this new format of storytelling may not be going away anytime soon.

I was introduced to another modern "vlogging" adaptation of a classic story by Hannah.  A group based in Vancouver has been re-telling Charlotte Bronte's Jane Eyre (as The Autobiography of Jane Eyre) for the last several months.  I was a little skeptical at first since it seems like this particular story would be difficult to adapt to modern times, but the writers have done an excellent job with it.  The acting was a little shaky at first, but has become better over time.  The female characters have been especially good, like the Reed and Rivers sisters.  And though this adaptation is low-budget (and thus less polished than LBD or EA), that in itself adds a bit more intimacy to the story.  If you are a fan of Jane Eyre, or of vlogging adaptations in general, I really recommend this series.  It is close to wrapping up, so you'll be able to really binge watch.

Personally, I have really been enjoying this type of classic adaptation.  I think what is most amazing about it is that it takes a story that is so well known and loved and makes it seem new again.  Jane Eyre is a story that I know inside and out, and yet I have often found myself a giddy mess when some of my favorite scenes occurred.  In my mind, that is what really makes a story "classic"...it can be told in different ways in different times and it still resonates with us.  I especially loved the comments from viewers who were not familiar with the story and were now vowing to read it.

Do you enjoy these type of adaptations?  Do you have a favorite?  Is there a classic story you would like to be told in this way?  My vote is for Persuasion or North and South.
Posted by bookwormans at 4:59 PM

I really enjoy the AOJE as well. Funny that ;) I don't believe that it's as strong as The Lizzie Bennet Diaries (which is still my favourite of the various web series that I've seen so far). AOJE has had some pacing issues I think. There have been some episodes which have been pure filler. But I still think that it's a really well-done version of the story and that it's definitely one of the better Jane Eyre adaptations :)

Have you heard what the next Pemberley Digital adaptation is going to be? They're going to tackle 'Frankenstein'. I was a bit disappointed at first because I really wanted them to do 'Northanger Abbey' but now I think it's a brilliant decision. I'm not the biggest fan of the Mary Shelley novel (I find Shelley's writing rather dry) but the story was so ahead of its time that it makes a lot of sense to set it in the modern-day. And it will make for a really interesting contrast to the LBD/EA!