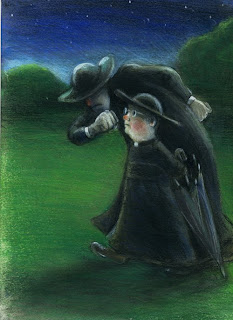 Since its early beginnings in Wilkie Collins' The Moonstone and Edgar Allen Poe's The Murders in the Rue Morgue, detective fiction has been popular for both children and adults. These stories have left us with many immortal characters like Miss Marple, C. Auguste Dupin and Sherlock Holmes. Another one of these characters was created by Christian writer and essayist G. K. Chesterton and is loved by many, both Christians and non-Christians alike. His name is Father Brown.

The Plot:
Father Brown is a short, stumpy Catholic priest who wears shapeless clothing and carries around a large umbrella and usually some packages that he is always fumbling with. He first appears in the story The Blue Cross which is followed by 51 other short stories divided into 5 separate books and is often aided by the jewel thief turned detective, Flambeau. He is a quiet and humble man, but for all of his appearances of clumsiness and naivety, Father Brown has a keen insight into human nature that helps him solve many baffling crimes and even says at one point "Has it never struck you that a man who does next to nothing but hear men's real sins is not likely to be wholly unaware of human evil?".
My Review (Caution: Spoilers)
It is virtually impossible for me to review these Father Brown stories without comparing them to perhaps the greatest fictional detective of all time, Sherlock Holmes. Even Chesterton read and appreciated Arthur Conan Doyle's famous works and I believe that the comparison is the best way to bring out the qualities (and possible shortcomings) of this work.
Father Brown is said to be the character who is closest to Chesterton's own point of view. He solves his crimes through reasoning and is more concerned with the spiritual details of the case rather than the scientific. Whereas Holmes would solve a case based on his knowledge in chemistry, history and random facts, Chesterton describes his method in this manner: "You see, I had murdered them all myself.... I had planned out each of the crimes very carefully. I had thought out exactly how a thing like that could be done, and in what style or state of mind a man could really do it. And when I was quite sure that I felt exactly like the murderer myself, of course I knew who he was. " Instead of being concerned with observing every physical detail surrounding the case, Chesterton instead lays before us clues in the forms of the suspects themselves, encouraging us to get inside their minds and to think like they would think.
Because of the differences in Holmes' and Father Brown's methods, we cannot read the stories in the same way. With Holmes, we must pay attention to every physical detail that is given us. When Doyle describes the landscape, the weather and the crime scene he means something by it and it would behoove us to recognize the importance of each of these details. With Chesterton it is different. I spent the first few stories intensely studying his descriptions of the opening scenes only to discover that they had very little to do with the crime itself. Only later did I discover that like Father Brown, we must concern ourselves with the people of the story, not the things.
There is, however, one similarity between Holmes' method and Father Brown's and that is there is always a rational explanation for each case. Chesterton actually adds some humor by the fact that many of the characters who would claim to be very rational are the first to believe that there was a supernatural cause for a certain crime, whereas Father Brown (who we would think would be more inclined to attribute the crime to something supernatural) always discovers the truth rationally. "You attacked reason. It's bad theology."
In the end, the Father Brown stories act as the perfect counterbalance to Sherlock Holmes. Though they can seem a little slow-going at first, each story gets progressively more interesting, and as we change our point of view, we are able to glimpse the many biblical truths concerning human nature that Chesterton was trying to convey. Though these stories don't beat Doyle's masterpieces, they are a wonderful contrast to them and are truly worth your time.
The Movie:
In 1954, the movie Father Brown was made starring Sir Alec Guinness as the famous detective. It is widely regarded as a minor classic and is even said to have prompted Guinness' conversion to Catholicism.
There are also 13 episodes of the Father Brown TV series of 1974 starring Kenneth More as Father Brown. These are now available on DVD.
Trivia: These two Father Browns starred together in the 1970 musical Scrooge with Guinness playing Jacob Marley and More playing the Ghost of Christmas Present.
Posted by bookwormans at 11:01 AM

Good review. I agree with pretty much everything, especially your analysis of the differences between Holmes and Brown.

The Classic Tales Podcast these last few weeks has presented The Hound of the Baskervilles. It had been a long time since I read that, so it was a really great refresher. I'm really excited about today's podcast, though: Jeeves and the Unbidden Guest, by P.G. Wodehouse. I'm sure it'll be good entertainment tonight. P.G. Wodehouse is a master of comedy.