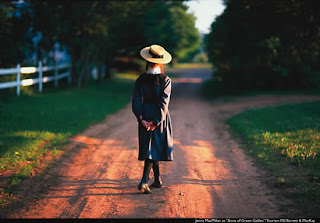 The world's favorite redhead turns 100 this year. First published in 1908, L. M. Montgomery's classic Anne of Green Gables continues to captivate readers today. Who can forget the story of the redheaded orphan with an irrepressible imagination and a gift of talking who worms her way into the hearts of everyone she meets, no matter how reluctant they are. This story remains extremely popular all over the world and has been translated into 36 languages. Here are 10 ways to celebrate this momentous occasion:

10. Visit Prince Edward Island. You can visit the Green Gables farmhouse in Cavendish or hike through Balsam Hollow, the inspiration for the "Haunted Woods". If you go in the summer, you can attend PEI's two musicals based on the books: "Anne of Green Gables" and "Anne & Gilbert".
9. Go on an outing with your "bosom friend". Though Anne was quite capable of getting herself into scrapes without any assistance, it was always twice as much fun when Diana was involved.
8. Make some raspberry cordial. One of Anne's most famous mishaps involved Diana, a tea party and a bottle of currant wine. Here is a recipe for the drink that Anne was supposed to serve.
7. Read Tennyson's "Lancelot & Elaine". Who can forget Anne as "The Unfortunate Lilly Maid" having to be rescued by the last person in the world she wanted to see, Gilbert Blythe. Here is the poem that she and her friends were acting out.
6. Host a concert. Have a party where you and your friends recite your favorite poems like Anne did at the White Sands hotel. White organdy dress optional.
5. Begin writing a poem or short story. Your creation may not win a prize from a baking powder company, but perhaps that is best.
4. Rename your surroundings. Anne liked to shake her world up by renaming her ordinary surroundings. Whether it is your bedroom, your car or a nearby street, this is a simple way to add newness to the ordinary things around you.
3. Find some Kindred Spirits. Though Diana would always be Anne's closest friend, Anne was not adverse to making new friends. From Miss Lavender and the ladies of Patty's Place to Captain Jim and the beautiful but lonely Leslie Moore, Anne encounters many Kindred Spirits in her adventures, often when she least expects to find them.
2. Watch the films. If you have never seen the 1985 & 1987 television films Anne of Green Gables and Anne of Avonlea, then you have no idea what you are missing. Megan Follows, Jonathon Crombie and a host of other wonderful actors bring these beloved stories to life in a beautiful and faithful way.
1. READ THE BOOKS!! Or, as in my case, re-read them!!
Posted by bookwormans at 9:15 AM