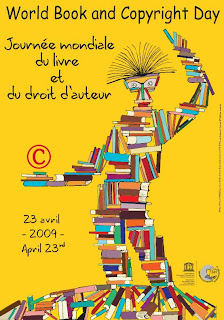 Today is a big day in the world of reading. It's World Book Day!! This yearly event was created in 1995 by UNESCO and celebrates reading, publishing, and international copyright laws. There are many celebrations held throughout the world including "The Big Read" to promote worldwide literacy. Also, a city is chosen to be World Book Capital for the next year. Past cities have included Madrid (2001), New Delhi (2003), Turin (2006), and Amsterdam (2008). This year, the distinction has been awarded to Beirut, Lebanon. It is believed to have been in the town of Byblos on the Lebanese coast that the 22-character Phoenician script was created in the 11 century B. C. Today, Beirut is known as the "Printing Press of the Arab World" playing a prominent role in the circulation of books in the east. Over 400 publishing houses produce works in Arabic, French and English.
So, why April 23? There are two main reasons. The first is that it corresponded with a celebration already going on in Spain. In 1923, booksellers in Catalonia, Spain began connecting books with April 23 to honor Miguel de Cervantes who died on that day. Since then, it has been traditional for lovers to give each other roses and books on St. George's Day (also April 23). Half the yearly books sold in the region are sold at this time. I say, heck with St. Valentine and his chocolate, I'm moving to Spain!
UNESCO also chose this date because it is also the birth/death date of William Shakespeare as well the birth/death date of many other world writers.
I encourage all of you readers to take some time over the next week to celebrate World Book Day. Buy a book for someone you love (or for yourself), read up on your favorite author, volunteer at your local library, donate to organizations like First Book, or simply curl up with a good book and lose yourself in it. Most importantly, keep an eye on "Complete and Unabridged", I just might have a nice surprise in the next week or so!
Posted by bookwormans at 6:56 AM